The 9th Circuit Court of Appeals… universally recognized as the most Liberal court in America, has upheld the Arizona voter I.D. law. 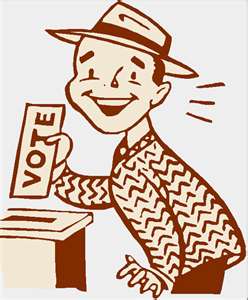 This ruling is likely to add fuel to the fiery debate about voting rights in a presidential election year.

But the court also ruled the state cannot demand that they show proof of U.S. citizenship to register to vote in federal elections, a decision the state’s attorney general said he would appeal.

That could set the stage for yet another U.S. Supreme Court showdown over a contentious Arizona law touching on citizenship issues. Next week, the high court will hear arguments over the state’s effort to crack down on illegal immigration.

At issue in Tuesday’s ruling was a 2004 Arizona ballot initiative, Proposition 200, that amended state election laws to add the citizenship and identification requirements. The measure – designed to stop illegal immigrants from voting – was challenged in court shortly afterward.

While agreeing that Arizona was within its rights to require identification at voting places, the appeals court concluded the national Voting Rights Act superseded the law’s requirement that anyone registering to vote in a federal election show “satisfactory evidence” of U.S. citizenship.

A growing number of states have enacted voter ID laws, prompting a divisive debate over whether proponents are seeking to limit access to the polls in a presidential election year.

Thirty states have laws requiring that voters show at least some type of identification to vote in November, according to the National Council of State Legislatures.

Several states have enacted voter photo ID laws since the start of 2011, including Texas, Wisconsin, Kansas and Pennsylvania, though the U.S. Justice Department has blocked the Texas law and a state judge has blocked the Wisconsin law.

The Arizona law’s “photo identification requirement is not an invidious restriction” and does not violate the 14th Amendment’s equal protection clause, the court’s majority concluded in an opinion by Judge Sandra Ikuta.

But the court was not convinced by Arizona’s arguments in favor of Proposition 200’s proof of citizenship requirement.

“In sum, the NVRA and Proposition 200’s registration provision … do not operate harmoniously as a single procedural scheme for the registration of voters for federal elections,” Ikuta wrote.

“Therefore, under Congress’s expansive Elections Clause power, we must hold that the registration provision … is pre-empted by the NVRA” when a when a voter seeks to register for a federal election.

The U.S. Supreme Court will hear arguments on another controversial Arizona law touching on citizenship issues – the state’s first-in-the-nation effort to crack down on illegal immigration inside its own borders.

Arizona Attorney General Tom Horne, a Republican, said on Tuesday that he would appeal the registration part of the split ruling to the U.S. Supreme Court.

“The court upheld the requirement that persons wishing to vote must show identification at the polling place. The part we will have to appeal deals with registration. We always expected the U.S. Supreme Court to have to decide this one,” Horne said in a statement.

“The people of Arizona have a right to request that people registering to vote show some evidence they are citizens and we fully expect the U.S. Supreme Court to uphold that,” he added.

Arizona’s Republican governor, Jan Brewer, welcomed the part of the ruling about the ID requirement, her spokesman said.

“This decision prevents Arizona from evenly applying its proof of citizenship requirement for all individuals registering to vote.”

Plaintiffs in the suit, who argued that the law led to legal residents being unable to register to vote, hailed the ruling to strike down the proof of citizenship requirement as a victory.

“Today’s ruling vindicates all the U.S. citizens who were improperly rejected for voter registration in Arizona,” said Nina Perales, vice president of litigation for the Mexican-American Legal Defense and Educational Fund.

Arizona may no longer defy federal law in voter registration “particularly in a manner that discriminates against newly naturalized citizens,” Perales said in a statement.

The group said the lead plaintiff in the case, Jesus Gonzalez, was a newly naturalized U.S. citizen who was twice rejected when he attempted to register to vote because state officials said the could not confirm his citizenship.

In Case You Missed It:  The FDA did NOT grant full approval to the Pfizer shots
Posted in Freedoms and tagged Election, US Citizen.

Barney Frank; Obamacare Was a ‘Mistake’

Ultra Leftist Rep. Barney Frank (D., Mass.), who is retiring from the House this year, now says that President Obama...