Sudanese Muslims torched a Catholic church Sunday in the capital of Khartoum, part of clashes between Sudan and South Sudan over control of an oil town. Sudanese warplanes bombed a key South Sudanese town Monday. 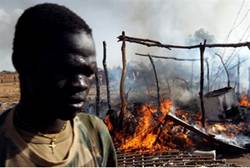 A Sudanese soldier walks in a bombed market

Khartoum media said that church was part of a school complex used by South Sudanese Christians and Ethiopian refugees, and that fire trucks were not able to extinguish the blaze. South Sudan, mostly Christian, last year ceded from Sudan, which is overwhelmingly Muslim. Israel and South Sudan have established diplomatic ties.

The attack on the church by a mob of several hundred Muslims was part of a larger battle over borders between the two countries and control of the oil town of Heglig.

The Monday morning bombings of Bentiu killed at least one child and virtually eliminated hopes that a previous withdrawal of South Sudanese troops from Heglig would end the fighting. The bombs destroyed a bridge and a market, where one person said that three civilians were killed.

The Muslim that attacked the church also invaded a farm run by the Sudan Presbyterian Evangelical Church in Khartoum on Saturday.

The church’s pastor Yousif Matar Kodi was quoted by AFP as saying, “They burned Bibles and torched the school for training clergy on the farm, as well as the residence of the students.

“They are the only people who do such things. Bulldozers came inside the farm and removed some trees that have been there for 100 years.”

He said a Muslim cleric in a nearby mosque incited followers to take the land from the church, and other Muslim clerics said the battle over the oil town of Heglig was a “holy war.”

The rockets that were fired from Egypt toward Israel earlier this month were smuggled from Libya, an Israeli defense official...