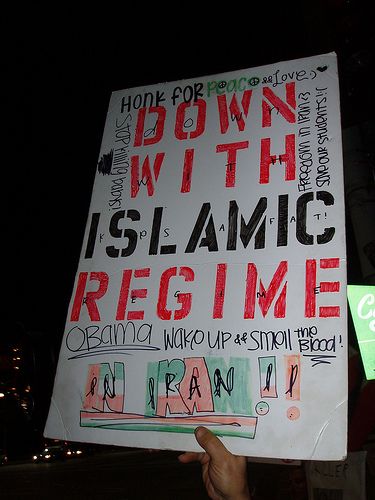 It is time for America, the West and democratic Arab countries to bring Regime Change in Iran, and sow the seeds of Resistance in Iran by encouraging, inspiring and supporting Uprising and Insurrection in Iran against the despotic Ayatollah Khamenei and his autocratic Mullahs. It may well be the only way to prevent a strike by the Israelis on Iranian nuclear assets, who fear nuclear weapons in the hands of the Mad Mullahs, will lead to another Holocaust of the Jewish Race.

The West and its Allies should begin waging a Propaganda War to initiate an Iranian Resistance Army front against Khamenei and the Mullahs to bring about REGIME CHANGE IN IRAN, to liberate the Iranian people from the mass murder, rape, robbery and enslavement imposed upon ordinary Iranians by the hard line Islamic rulers and barbaric Sharia Law. By terminating the Mullah Regime in Tehran, America and the West would be cutting off the head of the Islamic snake, which in turn would give inspiration and courage to the Iranian people to fight against their barbaric oppressors, and encourage the Iranian Military to defect to the Free Iranian Army, and greatly reduce the risk of collateral damage to innocent Iranian civilians. 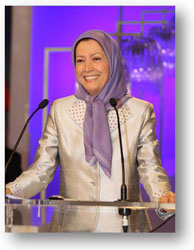 And this time America and the West must show total support and solidarity with the Persian people. Maryam Rajavi is the People’s Choice to be the President Elect of Iran once the Mullah Regime is overthrown.


Iranians are a very diverse people, only about 50% are Persian; the rest are Baloch, Turcman, Kurd, Azeri and Arabs. Millions of Iranians have fled Iran; tens of thousands have been massacred; people shot dead in streets; hanged and women debased and brutally raped under the cruel and medieval rule of the Ayatollah Khamenei and President Mahmoud Ahmadinejad. 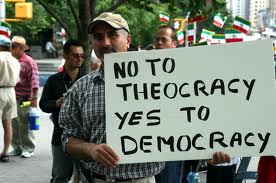 America and the West should step up its campaign of destabilizing Khamenei and the Mullahs by means of Satellite TV Channels of bringing the Truth and Hope direct to the Iranian people,  sabotage, electronic jamming and bugging of its military and nuclear facilities, and increasing the severity of economic sanctions on the Islamic Regime. By provoking Insurrection in Iran, the West would redress the balance that been tilting in favor of the Iran/China/Russian Axis, terminate the nuclear quest and despotic rule of the Mullahs, and start the process of freeing Iranians from Radical Islam and Sharia Law, and return Iran to Persian and Secular Rule.

In Case You Missed It:  AZ forensic audit results show SYSTEMIC fraud, faked votes, more than 5X the margin of "victory" from just one county out of the entire state ... prepare for CRISIS THEATER distractions
Posted in Freedoms, Terrorism.

What Young Americans Should Really Fear

Over the past week, President Obama has been on the road making an appeal to young Americans, offering a sales...