At this week’s meeting of the Jewish Community Relations Council (JCRC), J Street’s regional director said that in the event that war broke out involving Israel, J Street would not necessarily support the Jewish state. 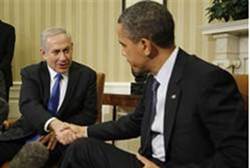 Netanyahu and Obama at the White House this week

In an open letter published in the Boston Jewish Advocate, Paul Sassieni, treasurer of the JCRC, states that J Street’s Regional Director, Melanie Harris,  “reiterated proudly that J Street would not necessarily support Israel in a conflict, but would weigh the circumstances.”

Sassieni asserts that, “[I]f, heaven forbid, war breaks out, the wise sages of J Street (and supposed military experts) will decide whether or not Israel merits our support. And this is an organization which claims to be “pro-Israel”! With friends like that, who needs enemies?”

“While there is a plurality of views in our community on many issues, there is a broad consensus that if attacked, we put our differences to one side and stand by the people of Israel unambiguously. J Street has put itself beyond that consensus,” the letter reads.

“It’s one thing to question the likelihood of success of military action against Iran – and we certainly hope and pray that sanctions and diplomacy will work – but quite something else to say that if a conflict breaks out, we would not unambiguously stand with Israel.”

“Shame on them, but at least the pro-Israel community understands where they stand. In Israel’s hour of need, J Street cannot be counted on,” concludes the letter.

J Street then refuted the accusation stating that the organization would support Israel in the event that that it would “end up in an ill-advised military conflict with Iran.”

President Barack Obama has bypassed a Congress block and signed a waiver declaring that aid to the Palestinian Authority is...