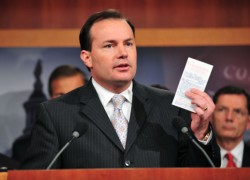 Senator Mike Lee (R-Utah) made the case that the Violence Against Women Act (VAWA), passed by the Senate, “oversteps the Constitution’s rightful limits on federal power.”

Sen. Lee argued on the Senate floor that “everyone agrees that violence against women is reprehensible.”  He went on to make the case that this is an issue better left to the states and not an issue in the constitutional purview of the federal government.

Sen. Lee argues that there are three reasons why the VAWA should not have been passed by the United States Senate:

Senator Mike Lee is spot on.  Raising the reauthorization of VAWA to a national fight is using the legislation as a political talking point against conservatives.  This legislation is unconstitutional and fundamentally flawed with duplication and waste.

Iranians Determined to Fool the World

Defense Minister Ehud Barak said Thursday that Iran "is determined to fool the entire world" and obtain nuclear weapons. "They...