One of the great differences between conservatives and liberals is that conservatives will freely admit that they have an ideology. We’re kind of dorks that way, squabbling over old texts like Dungeons and Dragons geeks, wearing ties with pictures of Adam Smith and Edmund Burke on them. 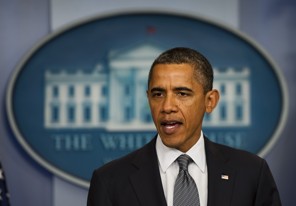 But mainstream liberals from Franklin Roosevelt to Barack Obama — and the intellectuals and journalists who love them — often assert that they are simply dispassionate slaves to the facts; they are realists, pragmatists, empiricists. Liberals insist that they live right downtown in the “reality-based community,” and if only their Republican opponents weren’t so blinded by ideology and stupidity, then they could work with them.

This has been a theme of Obama’s presidency from the start. A couple of days before his inauguration,Obama proclaimed: “What is required is a new declaration of independence, not just in our nation, but in our own lives — from ideology and small thinking, prejudice and bigotry” (an odd pronouncement, given that “bigoted” America had just elected its first black president).

In his inaugural address, he explained that “the stale political arguments that have consumed us for so long no longer apply. The question we ask today is not whether our government is too big or too small, but whether it works.”

Whether the president who had to learn, in his own words, that there’s “no such thing” as shovel-ready projects — after blowing billions of stimulus dollars on them — is truly focused on “what works” is a subject for another day. But the phrase is a perfect example of the way liberals speak in code when they want to make an ideological argument without conceding that that is what they are doing. They hide ideological claims in rhetorical Trojan horses, hoping to conquer terrain unearned by real debate.

Of course, Republicans are just as guilty as Democrats when it comes to reducing arguments to bumper stickers. (Rep. Paul Ryan of Wisconsin has written that “the president’s economic experiment has failed. It is time to get back to what we know works.”) But the vast majority of Republicans, Ryan included, will at least acknowledge their ideological first principles — free markets, limited government, property rights. Liberals are terribly reluctant to do likewise. Instead, they often speak in seemingly harmless cliches that they hope will penetrate our mental defenses.

Here are some of the most egregious examples:

Affirmative action used to be defended on the grounds that certain groups, particularly African Americans, are entitled to extra help because of the horrible legacy of slavery and institutionalized racism. Whatever objections opponents may raise to that claim, it’s a legitimate moral argument.

But that argument has been abandoned in recent years and replaced with a far less plausible and far more ideological claim: that enforced diversity is a permanent necessity. Lee Bollinger, the president of Columbia University, famously declared: “Diversity is not merely a desirable addition to a well-run education. It is as essential as the study of the Middle Ages, of international politics and of Shakespeare.”

It’s a nice thought. But consider some of the great minds of human history, and it’s striking how few were educated in a diverse environment. Newton, Galileo and Einstein had little exposure to Asians or Africans. The genius of Aristotle, Socrates and Plato cannot be easily correlated with the number of non-Greeks with whom they chatted in the town square. If diversity is essential to education, let us get to work dismantling historically black and women’s colleges. When I visit campuses, it’s common to see black and white students eating, studying and socializing separately. This is rounding out everyone’s education?

Similarly, we’re constantly told that communities are strengthened by diversity, but liberal Harvard sociologist Robert Putnam has found the opposite. In a survey that included interviews with more than 30,000people, Putnam discovered that as a community becomes more ethnically and socially varied, social trust and civic engagement plummet. Perhaps forced diversity makes sense, but liberals make little effort to prove it.

It’s a nice idea, but it’s manifestly absurd. If violence never solved anything, police would not have guns or nightsticks. Obama helped solve the problem of Moammar Gaddafi with violence, and FDR helped solve the problem — far too late — of the Holocaust and Hitler with violence. Invariably, the slogan (or its close cousin “War is not the answer”) is invoked not as a blanket exhortation against violence, but as a narrow injunction against the United States, NATO or Republican presidents from trying to solve threats of violence with violence.

It is dogma among liberals that sophisticated people understand that the Constitution is a “living, breathing document.” The idea was largely introduced into the political bloodstream by Woodrow Wilson and his allies, who were desperate to be free of the constraints of the founders’ vision. Wilson explained that he preferred an evolving, “organic,” “Darwinian” Constitution that empowered progressives to breathe whatever meaning they wished into it. It is a wildly ideological view of the nature of our political system.

It is also a font of unending hypocrisy. After the attacks of Sept. 11, 2001, conservatives argued that the country needed to adapt to a new asymmetrical warfare against non-state actors who posed an existential threat. They believed they were working within the bounds of the Constitution. But even if they were stretching things, why shouldn’t that be acceptable — if our Constitution is supposed to evolve with the times?

Yet acolytes of the living Constitution immediately started quoting the wisdom of the founders and the sanctity of the Constitution. Apparently the document is alive when the Supreme Court finds novel rationalizations for abortion rights, but when we need to figure out how to deal with terrorists, suddenly nothing should pry original meaning from the Constitution’s cold, dead hands.

By the way, conservatives do not believe that the Constitution should not change; they just believe that it should change constitutionally — through the amendment process.

Obama this month denounced the Republican House budget as nothing more than “thinly veiled social Darwinism.” Liberals have been trotting out this Medusa’s head to petrify the public for generations. It does sound scary. (After all, didn’t Hitler believe in something called “social Darwinism”? Maybe he did.) But no matter how popular the line, these liberal attacks have little relation to the ideas that the “robber barons” and such intellectuals as Herbert Spencer — the “father” of social Darwinism — actually followed.

Spencer’s sin was that he was a soaked-to-the-bone libertarian who championed private charity and limited government (along with women’s suffrage and anti-imperialism). The “reform Darwinists” — namely the early-20th-century Progressives — loathed such classical liberalism because they wanted to tinker with the economy, and humanity itself, at the most basic level.

More vexing for liberals: There was no intellectual movement in the United States called “social Darwinism” in the first place. Spencer, a 19th-century British philosopher, didn’t use the term and wasn’t even a Darwinist (he had a different theory of evolution).

Liberals misapplied the label from the outset to demonize ideas they didn’t like. They’ve never stopped.

At least until George Zimmerman
was in the dock, this was a reflexive liberal refrain. The legendary English jurist William Blackstone — the fons et origo of much of our common law — said, “Better that 10 guilty persons escape than that one innocent suffer.” In fact, this 10 to 1 formula has become known as the “Blackstone ratio” or “Blackstone’s formulation.”

In a brilliant study, “n Guilty Men,” legal scholar Alexander Volokh traced the idea that it is better to let a certain number of guilty men go free — from Abraham’s argument with God in Genesis over the fate of Sodom, to the writings of the Roman emperor Trajan, to the legal writings of Moses Maimonides, to Geraldo Rivera.

As a truism, it’s a laudable and correct sentiment that no reasonable person can find fault with. But that’s the problem: No reasonable person disagrees with it. There’s nothing wrong with saying it, but it’s not an argument — it’s an uncontroversial declarative statement. And yet people say it as if it settles arguments. It doesn’t do anything of the sort. The hard thinking comes when you have to deal with the “and therefore what?” part. Where do we draw the lines? If it were an absolute principle, we wouldn’t put anyone in prison, lest we punish an innocent in the process. Indeed, if punishing the innocent is so terrible, why 10? Why not two? Or, for that matter, 200? Or 2,000?

Taken literally, the phrase is absurd. Letting 10 rapists and murderers go free will almost surely result in far more harm to society than putting one poor innocent sap in jail.

When you hear any of these cliches — along with “I may disagree with what you say, but I would defend to the death your right to say it,” which is another personal favorite — understand that the people uttering them are not trying to have an argument. They’re trying to win an argument without having it at all.

Jonah Goldberg is editor at large of the National Review Online and a fellow at the American Enterprise Institute. His book “The Tyranny of Cliches: How Liberals Cheat in the War of Ideas” will be published Tuesday.

Read more from Outlook, including:

Thomas Mann and Norman Ornstein’s “Let’s just say it: The Republicans are the problem.”