Defense Minister Ehud Barak warned on Monday that as long as Iran poses a threat to Israel with its nuclear program, all options are on the table. 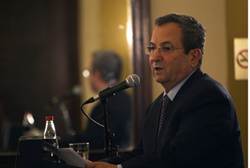 Speaking with journalists from the Foreign Press Association and quoted by The Associated Press, Barak said, “I believe it is well understood in Washington, D.C., as well as in Jerusalem that as long as there is an existential threat to our people, all options to prevent Iran from getting nuclear weapons should remain on the table.”

“I have enough experience to know that a military option is not a simple one,” Barak added. “It would be complicated with certain associated risks. But a radical Islamic Republic of Iran with nuclear weapons would be far more dangerous both for the region and, indeed, the world.”

Barak dismissed the remarks by critics of a strike on Iran’s nuclear facilities, saying, “Parts of the world, including some politically motivated Israeli figures, prefer to bury their heads in the sand.”

Diskin said that Netanyahu and Barak are “messianic” and “unfit to hold the reins of power. They give the public a false picture on the Iran question. They create the feeling that if Israel does not act, Iran will have a nuclear bomb, even though experts think that an attack on Iran will cause it to speed up the process of arming with nuclear weapons.”

Diskin was later supported by former Mossad Chief Meir Dagan. Former Prime Minister Ehud Olmert also implied that, like Diskin, he did not trust the current leaders of Israel to make the right decisions.

“You have to have full trust in the judgment of those who have to take decisions,” Olmert told CNN on Monday.  “And you could understand from what I said that maybe something in my trust is lacking.”

Barak told the foreign journalists that time is running out for a strike, as “Iran’s military nuclear program will be sufficiently developed and suitably concealed, rendering the facilities immune to surgical attacks.”

He also addressed the past year of upheavals in the Middle East that have overthrown several leaders and caused Islamist political parties to gain prominence.

“Israel has found itself sitting as an island of stability in a stormy sea, a sea in which the waves of radicalism are growing in strength,” Barak said.

“We urge Egypt to contain lawlessness in the Sinai Peninsula,” he said, referring to the unstable security situation in the Sinai Peninsula since the ouster of former Egyptian president Hosni Mubarak last year. Terror groups have taken advantage of the situation to carry out terror attacks against Israelis and fire rockets at the city of Eilat.

“This is imperative in order to keep our two nations firmly on the path of peace, a peace that has contributed so much to so many for so long now,” he added.

Barak also addressed Syria, where a bloody 14-month uprising against President Bashar Assad is in progress.

“Whatever follows Assad’s bloodstained regime will be greeted with Israel’s extended hand of peace,” he said.

President Barack Obama delivers an address to the American people on US policy and the war in Afghanistan during his...