The Obama administration, despite the nation’s economic woes, effectively killed the job-producing Keystone Pipeline last month. The Arab Spring is turning the oil production of Libya and other Arab nations over to the Muslim Brotherhood. Iraq is distancing itself from the U.S. And everyone recognizes that Iran, whose crude supplies are critical to the European economy, will do anything it can to frustrate America’s strategic interests. In the face of all of this, Obama insists on cutting back U.S. oil potential with outrageous restrictions. 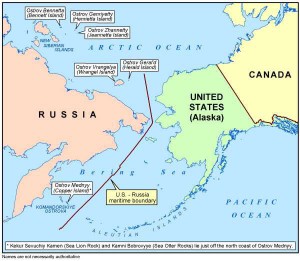 Part of Obama’s apparent war against U.S. energy independence includes a foreign-aid program that directly threatens my state’s sovereign territory. Obama’s State Department is giving away seven strategic, resource-laden Alaskan islands to the Russians. Yes, to the Putin regime in the Kremlin.

The seven endangered islands in the Arctic Ocean and Bering Sea include one the size of Rhode Island and Delaware combined. The Russians are also to get the tens of thousands of square miles of oil-rich seabeds surrounding the islands. The Department of Interior estimates billions of barrels of oil are at stake.

The State Department has undertaken the giveaway in the guise of a maritime boundary agreement between Alaska and Siberia. Astoundingly, our federal government itself drew the line to put these seven Alaskan islands on the Russian side. But as an executive agreement, it could be reversed with the stroke of a pen by President Obama or Secretary Clinton.

The agreement was negotiated in total secrecy. The state of Alaska was not allowed to participate in the negotiations, nor was the public given any opportunity for comment. This is despite the fact the Alaska Legislature has passed resolutions of opposition – but the State Department doesn’t seem to care.

The imperiled Arctic Ocean islands include Wrangel, Bennett, Jeannette and Henrietta. Wrangel became American in 1881 with the landing of the U.S. Revenue Marine ship Thomas Corwin. The landing party included the famed naturalist John Muir. It is 3,000 square miles in size.

Northwest of Wrangel are the DeLong Islands, named for George Washington DeLong, the captain of USS Jeannette. Also in 1881, he discovered and claimed these three islands for the United States. He named them for the voyage co-sponsor, New York City newspaper publisher James Gordon Bennett. The ship’s crew received a hero’s welcome back in Washington, and Congress awarded them gold medals.

In the Bering Sea at the far west end of the Aleutian chain are Copper Island, Sea Lion Rock and Sea Otter Rock. They were ceded to the U.S. in Seward’s 1867 treaty with Russia.

The Obama administration must stop the giveaway immediately.

Author’s addendum, Feb. 17, 2012: This is not a new issue. In fact the Bush and Clinton administrations are directly at fault for the same inaction. A maritime agreement negotiated by the U.S. State Department set the Russian boundary on the other side of the disputed islands, but no treaty has ratified this action. Consequently, it is within the president’s power to stop this giveaway. The Alaska delegation’s failure to put pressure on the administration is inexplicable. State Department Watch, an organization that assisted with this article, has confronted each administration and is currently confronting the Obama administration — and has been met by silence. I’m hoping this piece will help reinvigorate efforts to stop this handover.

Joe Miller was the 2010 Republican nominee for the U.S. Senate from Alaska. He is a West Point graduate and decorated combat veteran from the first Gulf War. A former judge, Joe graduated from Yale Law School and was later awarded an advanced economics degree from the University of Alaska. He is presently chairman of Restoring Liberty Alaska PAC and Restoring Liberty Action Committee. Follow Joe at Facebook and Twitter.

The Obama administration is pushing for more Marxist policies, now they want to invade your cell phone records. Obama urges...