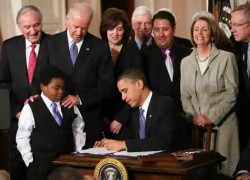 On Monday, the Obama Administration signaled that another part of its signature health care law may not be working out as planned. The Centers for Medicare and Medicaid Services (CMS) put an end to a program that offered a $100 incentive to insurance brokers and agents for recommending eligible people to Obamacare’s Pre-Existing Conditions Insurance Plan (PCIP).

Obamacare created the PCIP, commonly called a high-risk pool, as a temporary way to cover those with pre-existing or chronic conditions before 2014, when insurance companies will be prohibited from excluding people based on health conditions.

In an explanation of the Administration’s decision, Ryan Young, senior director of federal government affairs for the Independent Insurance Agents Brokers of America, stated, “They just said enrollment’s up to where we want it to be, basically, and we don’t need your services anymore.”

This is interesting given that thus far, the PCIP has largely been a failure. The Administration claims that as many as one in two Americans, or 129 million people, could suffer from pre-existing conditions. Of these, the Medicare actuary predicted that 375,000 would enroll in the new program offering them coverage. Instead, enrollment stands at 15 percent of the actuary’s estimate, with only 56,257 enrollees. And that’s after eligibility requirements and premiums were lowered the previous year to encourage more to participate.

But despite the gross overestimation of enrollment, the program is still very pricey, because as it turns out, the per-person cost of coverage was underestimated. According to a report by the Administration, the cost per person in the high-risk pool is 2.5 times greater than originally estimated. This serious miscalculation of the high-risk pool’s costs raises concerns that covering the uninsured once the rest of the law goes online in 2014 will also be much more expensive than originally predicted.

The fact that the Administration is pulling back incentives to enroll in its high-risk pool may signify its acceptance that the pre-existing condition problem is nowhere near as big as it was portrayed during the health care debate. This is yet another reminder that Obamacare isn’t just terrible health policy with disastrous consequences; it’s overreaching, taxpayer-funded programs that our country didn’t need.

Exclusive: Joe Miller sounds alarm over deal to put land in hands of Putin's Kremlin By Joe Miller The Obama...