I’m going to violate the first law of punditry by conceding that I don’t get it when addressing Russia’s moves on the eve of a crucial missile defense conference with NATO in Moscow. 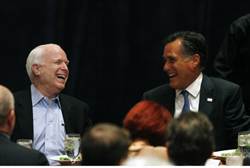 On the one hand, the Russians are attempting persuasion by presenting computer simulations designed to demonstrate the threat that the missile-defense system poses to the Russian deterrent capacity. This appeal to logic is more than counterbalanced by threats of an arms race in case no agreement is reached to Russia’s satisfaction.

Then Russia’s chief of staff Nikolai Makarov went one better and threatened “a decision to use destructive force pre-emptively will be taken if the situation worsens.”

Even assuming the worst of all Russian fears, namely that the placement of an antimissile system close to Russia’s borders (only if the final building block of Poland is put into place) will provide NATO with a first strike capability by denying Russia the capacity to retaliate, the timing simply does not make sense.

It may have made sense for Vladimir Putin, campaigning for the presidency, to invoke anti-American boilerplate reminiscent of the Soviet era. The Russian elections are over and the US elections,expected to be close, are gathering steam.

Russia has said openly that it prefers four more years of an Obama administration. It was the Obama administration that launched a “reset policy” with a view to smoothing things over with Moscow. Obama was also overheard on a live microphone assuring Russian President Dmitry Medvedev that after he was reelected he would have more flexibility on the missile issue.

Obama’s opponent Mitt Romney, while emphasizing his strong suit on the economic issues, has repeatedly taken potshots at Obama’s Russia policy, claiming that the “reset” has essentially benefited Russia with the US getting little in return and that Putin could not be trusted.

The Russian threats have already elicited a counterattack by Romney surrogate, Senator John McCain, who condemned Russian plans to install advanced missiles in Kaliningrad (the former German Koenigsberg annexed by the Soviet Union after WWII). According to McCain, the Russians were inflating the issue as “an excuse to have a military buildup in this part of the world, which is at peace [and this was] really an egregious example of what might be even viewed as paranoia on the part of Vladimir Putin.”

Russia, with its arms race and missile threats, is defeating its own arguments that the Cold War is over, by employing rhetoric reminiscent of the Brezhnev era.

John McCain’s Putin paranoia explanation is simple and could be correct.

If however we are already back in the USSR, the Russians could possibly think that their threats could prove effective due to what in Soviet times was referred to as the crisis of Western capitalism. Economically, the West is in trouble and its position recalls the 1980s, when Russia was in severe economic collapse and could not sustain an arms race with the United States and particularly in the innovative realm of antimissile defense.

Now with Western Europe countries slashing their defense budgets to the bone and the United States also seeking to economize, the comparatively solvent Russian economy can offer a more credible threat of sustaining an arms race. The European members of NATO definitely would not desire an escalation of tensions with Russia at this moment, particularly given their energy dependence on Russia.

Perhaps somebody in the Kremlin thinks Obama is vulnerable to pressure as well, because it is in his interest to keep relations with Russia on an even keel – at least up to the elections.

If, that is the Russian logic, it can very easily backfire.

Mitt Romney and Rick Santorum are set to have a private meeting on Friday in Pittsburgh, Pa. Romney will be...