This can be easily verified at https://www.iardc.org

Stands for Illinois Attorney Registration And Disciplinary Committee. It’s the official arm of lawyer discipline in Illinois; and they are very strict and mean as hell. 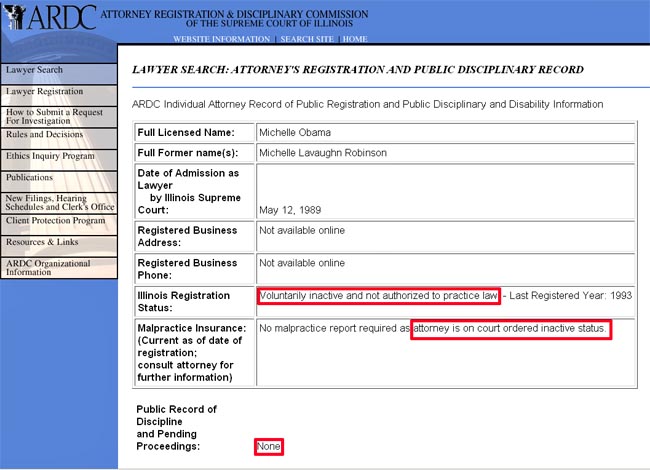 1. President Barack Obama, former editor of the Harvard Law Review, is no longer a “lawyer”. He surrendered his license back in 2008 in order to escape charges he lied on his bar application.

2 Michelle Obama “voluntarily surrendered” her law license in 1993. after a Federal Judge gave her the choice between surrendering her license or STAND TRIAL FOR insurance FRAUD.

3. So, we have the first black President and First “Lady” – who don’t actually have licenses to practice law. Facts.
Source: http://jdlong.wordpress.com/2009/05/15/pres-barack-obama-editor-of-the-Harvard-law-review-has-no-law-license/

4. A senior lecturer is one thing, a fully ranked law professor is another. Barack Obama was NOT a Constitutional Law Professor at the University of Chicago.

5. The University of Chicago released a statement in March 2008 saying Sen. Barack Obama (D-Ill.) “served as a professor” in the law school-but that is a title. Obama, who taught courses there part-time, never held, a spokesman for the school confirmed in 2008.

6. “He did not hold the title of Professor of Law,” said Marsha Ferziger Nagorsky, an Assistant Dean for Communications and Lecturer in Law at the University of Chicago School of Law.
Source: http://blogs.suntimes.com/sweet/2008/03/sweet_obama_did_hold_the_title.html ;

7. The former Constitutional Senior Lecturer (Obama) cited the U.S. Constitution the other night during his State of the Union Address. Unfortunately, the quote he cited was from the Declaration of Independence … not the Constitution.

9. Free Republic: In the State of the Union Address, President Obama said: “We find unity in our incredible diversity, drawing on the promise enshrined in our Constitution: the notion that we are all created equal.

10. Um, wrong citing, wrong founding document there Champ, I mean Mr. President. By the way, the promises are not a notion, our founders named them unalienable rights. The document is our Declaration of Independence and it reads: We hold these truths to be self-evident, that all men are created equal, that they are endowed by their Creator with certain unalienable Rights, that among these are Life, Liberty and the pursuit of Happiness.

11. And this is the same guy who lectured the Supreme Court moments later in the same speech?

In Case You Missed It:  Hillary Clinton Says She Will “Never be Out of the Game of Politics” – Calls For More Social Media Censorship (VIDEO)
Posted in Tyranny and tagged Constitution, Crime, Liberalism, Obama, U.S. Supreme Court.

Expulsion of American Reporter from China Should Prompt U.S. Action

News yesterday of the expulsion of Melissa Chan, an American reporting for Al-Jazeera in China, brings into stark focus the...