The elections in France ousted from power one of the leading opponents of Turkish accession to the European Union- Nicolas Sarkozy. 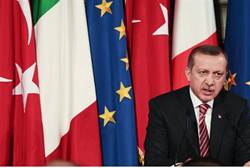 Although the new French President, Francois Hollande, ruled out the possibility of Turkey entering the European Union during his five-year term the Turks are optimistic enough to reopen their entry bid.

There are three major reasons accounting for the renewed Turkish optimism.

Turkey viewed Sarkozy as the main stumbling block, due to domestic political considerations, part of his desire to win over voters from the extreme right. Turkey’s European affairs minister Egemen Bagis commented: It worked in 2007, he added, “but I think it did not work in the second election.”

Sarkozy also sought the Armenian vote by pushing through a law that would criminalize denial of the of the Armenian massacre by the Turks during the First World War. The law was overturned by the French constitutional court.

Hollande was the beneficiary of Moslem votes during the election and appointed three Muslim ministers, including the government spokeswoman. The Socialist victory was celebrated at the Bastille square and at that celebration Moroccan and Algerian flags nearly outnumbered the French tricolor.

For the Turks, this at least means that the new government will be more sensitive to Moslem voters and cannot give the appearance of excluding Turkey on these grounds.

The Turks also see a weakening of German Chancellor Angela Merkel as a result of recent state elections in Germany. The main opposition party, the Social Democratic Party, is on record as favoring Turkish entry into the European Union. The most that Merkel would’ve granted the Turks is a privileged partnership, something the Turks reject as second rate status.

A third factor that is encouraging to the Turks is the deteriorating status of the traditional enemy – Greece – within the European Union. Particularly over the Cyprus issue, Greece and Cyprus have been blocking progress of negotiations between Turkey and the EU. As the Greeks are far from the flavor of the month, Ankara may conclude that Greek opposition could prove less influential.

Obstacles would remain, with the most important one being the state of democracy within Turkey that has been recently in retreat. Perhaps the Turks are counting on sentiments such as that expressed in a recent op-ed in Bloomberg “without the active pull of the EU negotiations, Turkey’s development as a free democracy has stalled”.

In other words, the EU has to restart negotiations even before Turkey has demonstrated its democratic bona fides in order to check anti-democratic trends.

In Case You Missed It:  WATCH: Arizona State Rep. Mark Finchem on Katie Hobbs’ Potential Prosecution: “She Knowingly Did This. I Don’t See How This Doesn’t End Up In Some Kind of a Conviction”
Posted in Freedoms and tagged Chancellor Angela Merkel, Europe, France, Freedom, Germany, Greece, Islam, Muslims, Nicolas Sarkozy, Recep Tayyip Erdogan, Socialism, Turkey.

Outgoing IAF commander Maj. Gen. Ido Nechushtan suggested on Friday that it would be better to keep quiet on the...