Syrian President Bashar Assad is quickly spending through his cash reserves as sanctions choke off many sources of funding, but the regime is getting help from Iran in bolstering finances, CNN has reported. 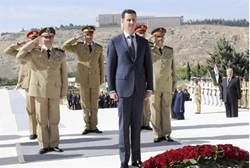 According to intelligence assessment shared with the news network, Assad likely had about $30 billion in cash reserves to spend when unrest and bloodshed began in March 2011. He’s about down to $6 billion to $9 billion.

Officials told CNN that with the war against his own people costing him about $1 billion a month, Assad should have been out of business by the end of the year. However, sources are also telling CNN that he is getting a cash infusion from Iran, funneled in through banks in Lebanon.

The assessment is that Iran’s support, combined with Russia’s political and economic support, could keep Assad going for months to come.

The assistance is just part of how Iran is helping Syria. The Islamic Republic has already provided further aid including small arms and assistance in helping the Syrian government use computer monitoring to root out the opposition using social media and other Internet tools.

The report said that while troops from 19 countries, including the United States, have converged in Jordan for the Eager Lion military exercise, U.S. and Jordanian elite forces are doing additional training to prepare for potential fallout should Syria’s government collapse.

According to CNN, U.S. Army Green Berets are training Jordanian special forces in a number of so called “worst-case scenarios”, including Syria’s chemical and biological weapons falling out of the control of government forces.

The U.S., Jordan and other allies are worried that opposition forces or groups like al Qaeda could seize some partial control of 20 key chemical and biological sites inside Syria.

According to The Associated Press, Minister Sufian Allaw said the measures have bled $4 billion from the nation’s ailing economy. The U.S. ambassador to Damascus, however, denied that the international sanctions are to blame for the shortages facing Syrians.

“Our sanctions purposefully do not target oil and diesel imports, because we know that the Syrian people need both for their day-to-day lives,” Ambassador Robert Ford wrote on the embassy’s Facebook page.

Ford said the government is using fuel imports for its tanks adding, “If the Assad regime decided to cut its military expenditures, more diesel and oil would be available for the Syrian people to use.”

Allaw, who spoke to reporters in Damascus, said sanctions had cost Syria’s oil sector about $4 billion.

Prices for a tank of cooking gas have spiraled to some $25 as shortages have spread across the country. Allaw said Syria’s gas production covers only half of the country’s needs.

He said that officials are seeking imports from countries not party to the sanctions, noting that a Venezuelan tanker carrying 35,000 tons of fuel docked in Syria on Tuesday. Another is supposed to follow.

He said officials were seeking to arrange further gas imports from Algeria and Iran.

Robert Mugabe The United Nations World Tourism Organization (UNWTO), created in 1970 and based in Madrid, identifies itself as the...