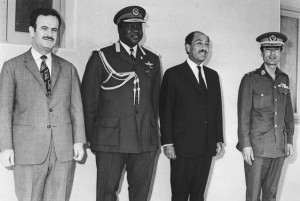 Idi Amin Dada with Hafez al-Assad, Sadat, Gaddafi in June 1972 in Kampala during an OUA summit.

A corrupt and brutal regime is uprooted by a military coup promising clean and responsible government. The streets are filled with outpourings of joy from all sections of the population. It does not take long for this to be dashed as the friendly image is replaced with that of ugly brutality so much that people yearn for the previous government. The honoured ties with Israel are cut in favour of something more hardline Islamic and closer to Saudi Arabia. The country’s main minority community become the scapegoat for all problems and it is not long before they are forced to leave en masse.

Egypt in 2012? Well no actually Uganda from 1971. The country had gained independence in 1962 from Britain with Milton Obote as its first prime minister. In 1966 he declared himself president and took unlimited powers under state of emergency rulings incarcerating political rivals without charge. His secret police enhanced the repression while his socialist policies mired the country in corruption, inefficiency and the usual plundering of state assets. In January 1971 he was overthrown by his one time confidant, colonel and army commander, Idi Amin.

By 1972 Amin had severed ties with Israel and tied his country more closely to Gaddafi’s Libya and also Saudi Arabia, playing up his Islamic beliefs. The USSR supplied much of the arms while East Germany trained his sinister secret police, the Public Research Bureau. In August that year Amin gave order that all ‘Asians’, that is Ugandans of Indian descent numbering some 80,000, were to be expelled. They were portrayed as a sneaky, slimy devious minority always looking for ways to cheat innocent and majority blacks. All the wealth owned by Asians would be given to Africans. With open season declared on them Asians were subjected to rape, assault and theft from Ugandan soldiers. Of course as with all inflammatory rhetoric masquerading as revolution the common man got nothing. Blacks were exploited even more than before. Of course now it was by Amin’s henchmen who helped themselves to businesses and homes once owned by Asians. An admirer of Hitler, Amin blamed Jews for exploiting African-Americans and himself offered sanctuary to Palestinian and Red Army Faction terrorists holding Israeli airline passengers hostage on an Air France jet in 1976. 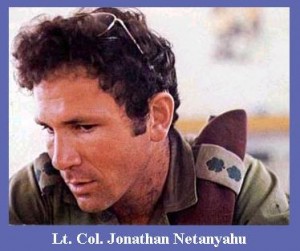 Jonathan Netanyahu, Israeli hero in the rescue mission to Entebbe 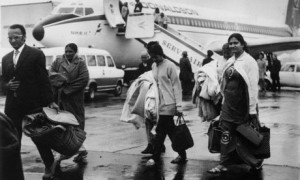 Ugandan Asians arriving in Britain in 1972

Britain was reluctant to take what Amin saw as a problem for the former colonial power. Racism and xenophobia were at their height with the National Front the fourth largest party. Barely disguising its Nazi past, the NF fueled, stoked and lived off the embers of prejudice. In the end with their British passports over 27,000 Asians found refuge in Britain. Smaller numbers made their way to Canada, USA, Australia, New Zealand, Kenya, Pakistan, India and West Germany. 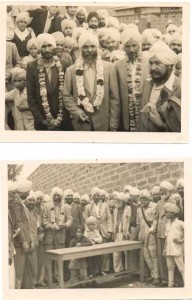 Kenya’s Ramgarhia Sikh Board being honoured around 1950

This story is well known. But what is less commonly acknowledged is that Amin was merely the most extreme example. Obote had already moved to restrict the economic activities of Asians under his socialist and Africanisation policies. A system of work permits and trade licenses was introduced in 1969 in order to restrict the role of Indians in commercial and professional activities. Asians were segregated and discriminated against in all walks of life. After Amin seized power, he merely exploited these divisions to spread propaganda against Asians involving stereotyping and scapegoating that minority. Many Asians had played a prominent role in the fight for Kenya’s independence. In 1998 Jomo Kenyatta passed Africanisation legislation leading to the expulsion of Asians holding British passports. Similar measures were taken in Tanzania and in Malawi in 1976. 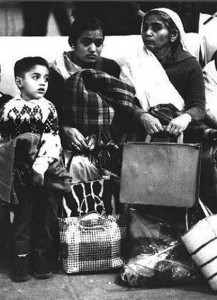 Expulsion of Asians from Kenya in 1968 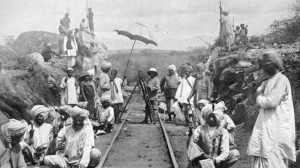 Brought over by the British from India to build the railways, Asians in Kenya played a pivotal role in developing East Africa

Unwanted by Britain the East African Asians nevertheless built up successful lives revitalising areas such as Leicester. A generation on the people and their descendants who had lost homes, businesses other assets, often arriving with little more than one suitcase, were now touted as an economic success story adding to the rich diversity of multiracial Britain. For the Ugandan Asians this was perhaps especially poignant. The ethnic cleansing was in hindsight a bizarre and extreme blessing in disguise. Unable to master such elementary economic elements such as supply chain the expulsion of Asians had led that country’s economy to spiral out of control which was only matched by the madness with which Amin slaughtered, raped and tortured thousands of his fellow black Ugandans. Kenya had descended into a mire of corruption and ethnic strife only masked by the fact that having neighbours as dysfunctional as Uganda, Sudan and Somalia actually made that postcolonial basket case actually look quite good in comparison. Tanzania’s socialist policies foundered. Malawi meanwhile as held under the iron grip of a despot who seemed rather cozy with apartheid South Africa. While some of the original Asian communities remained their existence has been precarious at best. On reflection those who emigrated or were expelled have done better. 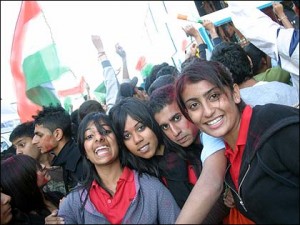 Now the lesson for the Arab Spring are painfully obvious. No amount of sanctions, pressure or exposure of minority rights being crushed is going to change the present course of events. They were in fact happening already even if the world media concentrated on the Palestinian refugees while ignoring the indigenous ‘Saturday people’ expelled from one Arab country after another as European colonial influence and rule waned. The fact that Jewish communities dated back to antiquity before Arabic was even spoken in much of the region made no difference to them being seen as an unwanted foreign element. Hoping to cast off dhimmitude and be equal with other Arabs, Michel Aflaq and Antun Sa’ada eagerly became ideologues for an aggressive anti-Semitic and anti-western Arab nationalism. George Habash and Hannan Ashrawi were merely treading in their footsteps. It must be remembered that a Christian majority Lebanon joined in the attack on Israel in 1948 along with Arab nations, including Egypt which ironically was under a liberal constitutional monarchy. But the ‘Sunday people’ inevitably entered into their ideological cul-de-sac. Lebanese Christians suffered massacre, rape, forcible conversion and expulsion by the very Palestinian fighters which they had welcomed. Long before the Arab Spring the much vaunted stalwarts of ‘secularism’ such as Saddam Hussein and Nasser did not hesitate to play their Islamic credentials. The Arab Spring is merely a culmination of these forces and for that reason it is no surprise that it has turned very ugly. The revolutions hailed as harbingers of a new age will only bring a New Order. Ancient Christian communities such as Copts and Assyrians face exile from their ancestral homelands. Ironically it is the colonial forces of Arab imperialism which cast them as foreign elements. As with the Ugandan Asians the demographic upheavals will prove painful and catastrophic, not least due to the vice like grip of rampant xenophobia they will face from host populations and the useful idiot complex of an ‘anti-racist’ Left which turns a blind eye to regimes which practice racial discrimination, religious intolerance, torture, crushing the voice of organised labour and have an unhealthy obsession with reading Arabic translations of Mein Kampf and the Protocols of the Elders of Zion. But ultimately there is no doubt that these populations will prove an asset to their host countries and upset the political correct consensus which will at last be forced to recognise that there are no moderates among the hardliners that have usurped the naive hopes of the Arab Spring, as the clerical fascist regimes degenerate into a morass of corruption, nepotism, internal hatred and social dysfunction so serious that they will be begging for an economic union with North Korea.

There is one more poignancy to all this. Where did Idi Amin seek exile? In Saudi Arabia, which along with Qatar is pulling the strings behind the scenes. Recognise the source of the problem and it can be dealt with. Western nations need to realise this, especially Britain which has been soft peddling with Saudi kings ever since that despotic monarchy formed the present state in 1932. This will not be of any more help that regarding Idi Amin as a rather jovial old chap when he took power in 1971. The expulsion of the Asians forced Britain to take note that they were not dealing with a splendid spiffing old army boy, a rather clumsy laughable buffoon, but a man with psychopathic tendencies who should never have been allowed to hold power over millions. What will it take for the same democracies to realise the ugly flotsam element that is emerging in the Arab Spring? In any case that day is not just fast approaching. It is already here. 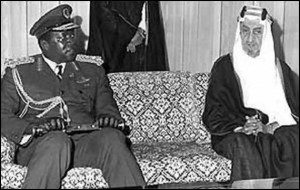 As Americans across the country gear up for Memorial Day, they have welcomed the recent dip in gas prices. Although...