GOP’s 2008 nominee was unwilling to confront Obama on character 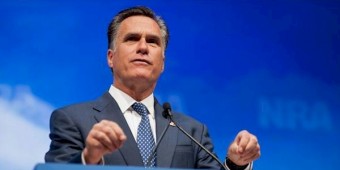 The political gurus who advised Mitt Romney to condemn a plan by a “super PAC” to use Barack Obama’s influential relationship with the Rev. Jeremiah Wright against him in the 2012 campaign will lead the presumed Republican nominee to the same fate as John McCain four years ago, said talk-radio host Michael Savage.

“Romney’s finished,” Savage told his “Savage Nation” audience yesterday. “He’s a fall guy. I’m the only one in the media who told you.”

Savage said Romney was “being misdirected by the very same people who misdirected McCain – who should have won the last election.”

Republicans in 2008 naturally voted for McCain, Savage explained, but the independents who decided the election “did not come out for him, because he was nothing but a two-faced RINO,” a Republican In Name Only.

“I can only conclude Romney doesn’t even understand what he’s doing, or Romney is a straight-out fall guy for the Republican establishment, offered a huge payout at the end of the term in the form of contracts, books, lecture tours or whatever,” Savage said.

In an interview with Townhall.com, Romney said, “I repudiate the effort by that PAC to promote an ad strategy of the nature they’ve described.”

Romney said he wants his campaign to “focus on the economy, on getting people back to work, on seeing rising incomes and growing prosperity – particularly for those in the middle class of America.”

McCain told Fox News four years ago that he didn’t believe Obama should be held accountable for the things that Wright said from the pulpit.

But Obama once counted Wright as his chief spiritual adviser, the man who led him to Christian faith, married him and his wife and baptized his family. Obama, who attended Wright’s church for two decades, insisted he never heard the pastor spew the anti-American, anti-white venom now well-known through video clips of sermons played on news shows and posted on the Internet during the 2008 campaign.

But Wright’s adherence to the Marxist-based Black Liberation Theology that animates his preaching is well documented, and it’s implausible that the published clips were anomalies.

As WND reported, Savage warned in March that Romney will lose in November if he is unwilling to strongly confront President Obama.

Savage took advantage of an interview with Donald Trump, who was campaigning for Romney, to send a message to the former Massachusetts governor.

“If there’s anything I can implore you, beg you even, to tell him, he’s got to understand that if he listens to those middle-of-the-road advisers the way McCain did, he’s going to go by the way of McCain,” Savage told the celebrity real estate magnate.

Savage pointed to Romney’s indication in an interview the previous day with CNBC that, unlike his Republican opponents for the nomination, he would not attack Obama.

Romney said the nation needs “to come together to recognize that even though we have differing views about the country and about where we should go, we all love the country.”

“I’m not going to say outrageous things about the president or about my opponents,” the former governor emphasized.

Trump insisted that Romney will be tough on Obama.

“I believe he will be very, very strong and very tough, and he’ll be very much opposed to what’s happening with this president,” Trump said.

Savage, pointing to issues such as the $500 million administration loan to the failing Solyndra “green energy” company, asked whether Romney would address “the gross corruption that we the people see on a daily basis.”

“I think he will be very, very strong,” Trump replied.

After the interview, Savage told a caller, however, that Romney says “nothing about so many of the issues that plague us today.”

Savage said Romney needs to heed the wisdom of the late Republican senator and presidential candidate Barry Goldwater, who famously said “extremism in the defense of liberty is no vice” and “moderation in the pursuit of justice is no virtue.”

“He has to get visceral, he has to get specific, and he has to be more extreme in the defense of liberty,” Savage said of Romney.

Savage later explained that Romney “doesn’t have to get mean and nasty and get insulting.”

“He just has to talk about the corruption and graft and greed,” Savage said.

The talk host read a line from his bestselling book “Trickle Down Tyranny” to underscore the stakes in the November election.

Savage prefaced it as “advice to the next president”: “Economies can be rebuilt, armies can be repopulated, but once a nation’s pride is gone, it can almost never be restored.”

“The Savage Nation” airs live Monday through Friday from 6 p.m. to 9 p.m. Eastern. It can be heard online through stations such as KSTE in Sacramento.

Israel has withdrawn its pledge to US President Barack Obama not to strike Iran's nuclear sites before the November presidential...