DEMAND THAT EVERY MEMBER OF CONGRESS STOP REWARDING ILLEGAL IMMIGRANTS!

MILLIONS OF ILLEGAL IMMIGRANTS WILL CONTINUE TO RECEIVE MORE THAN $4.2 BILLION FROM THE IRS EVERY YEAR, WHILE OBAMA RAISES OUR TAXES TO PAY FOR IT! 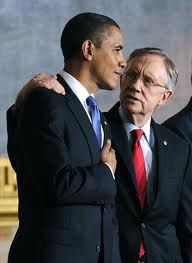 The Child Tax Credit Integrity Preservation Act, if passed, would amend the Internal Revenue Code of 1986 to clarify eligibility for the child tax credit by requiring at least one individual filing to be a U.S. Citizen in order to receive the refundable tax credit.

“I’m disappointed that the Majority Leader objected to our effort today to prevent billions in tax credits from being wrongly sent to illegal immigrants claiming they have dependents, many of whom do not live in the US.

This should not be a partisan issue: it is wrong for the government to use Americans’ tax dollars to directly subsidize illegality, especially at a time when our nation is spending so much money we don’t have.”

He also pointed out that the $4 billion rewarding illegal aliens via the tax credit loophole is “roughly the same amount the President proposes to raise annually by instituting the new Warren Buffett Tax.”

Clearly, Dirty Harry Reid needs to hear from us AGAIN.

By claiming up to 12 children that did not even live in the United States (and that are not believed to be these individuals’ biological children) illegal immigrants found yet another way to benefit at our expense to the tune of a whopping $4.2 billion, while the Oval Office does nothing but make it easier for them to take advantage of U.S. Citizens.

As chairman of the Border Security and Enforcement First Immigration Caucus, Sen. David Vitter (R-LA) has introduced legislation that would close the Additional Child Tax Credit loophole by requiring that recipients of this credit have a valid Social Security number. This proposed legislation has already gained the endorsement of Sen. Jeff Sessions (R-AL), but now it needs to get out of committee and onto the floor for a vote!

WTHR in Indianapolis blew the lid of this story after a local tax preparer revealed how many illegal immigrants are hosing us for tax refunds often in excess of $10,000 per household! When WTHR confronted the IRS about why it had not taken action, the IRS released the following in a statement:

“The law has been clear for over a decade that eligibility for these credits does not depend on work authorization status or the type of taxpayer identification number used. Any suggestion that the IRS shouldn’t be paying out these credits under current law to ITIN holders is simply incorrect. The IRS administers the law impartially and applies it as it is written. If the law were changed, the IRS would change its programs accordingly.

“The IRS disagrees with TIGTA’s (inspector general) recommendation on requiring additional documentation to verify child-credit claims. As TIGTA acknowledges in this report, the IRS does not currently have the legal authority to verify and disallow the Child Tax Credit and the Additional Child Tax Credit during return processing simply because of the lack of documentation.

“The IRS has procedures in place specifically for the evaluation of questionable credit claims early in the processing stream and prior to issuance of a refund. The IRS continues to work to refine and improve our processes.”

The tax preparer-turned-whistleblower told WTHR News that he can bring “stacks and stacks” of tax forms filed by illegal immigrants claiming as many as 12 dependents and getting upwards of a $10,000 refund. The preparer says, “It’s just so easy it’s ridiculous.”

Even worse, when dozens of these cases were reported to the IRS that illegal immigrants were using phony documents, false income and lying about children in the home in order to claim tax credits, NOTHING HAPPENED.

And nothing will happen until we compel each and every member of Congress to secure the border. In the meantime, we must demand they enforce existing immigration laws and stop incentivizing continuing illegal immigration by letting the estimated 12 million illegal immigrants already here milk the system for the few dollars our country has left!

You and I are forking our hard-earned money over to this tax-happy administration, and illegal immigrants are putting OUR money in their bank accounts. Obama won’t do anything about it, and Congress won’t either unless we hold their feet to the fire!

Let’s flood the offices of every member of Congress to remind them just whose interests they should be representing – OURS – not Barack Obama’s or the 12 million illegal immigrants with their hands out.

This outrageous crime must be stopped, and YOU can help stop it by demanding that every member of Congress support Sen. Vitter’s proposed legislation to CLOSE THE ADDITIONAL CHILD TAX CREDIT LOOPHOLE NOW!

“The problem isn’t that we haven’t agreed, the problem is that we’ve agreed way to much,” explained Senator Tom Coburn...