Hizbullah leader Hassan Nasrallah threatened Israel on Friday, saying the Jewish State is hiding behind walls and fences and that these cannot ensure its future existence. 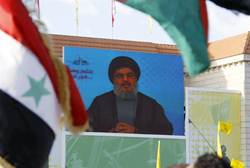 Nasrallah made the comments during a video speech which was broadcast during a rally in the Lebanese town of Bint Jbeil, marking 12 years since Israel withdrew its troops from Lebanon.

“They found refuge by enclosing themselves within fences. But the fences will never be able to protect them, and will never ensure their existence,” Nasrallah threatened.

“We are capable of not only hitting specific targets in Tel Aviv but also any place in occupied Palestine,” he said. “The era has come when we survive while they will be doomed to extinction. For every building that is destroyed in the southern suburbs, several buildings will be destroyed in Tel Aviv in return.”

He said that “The era when our homes get destroyed and theirs remain [intact] is over.”

Recently uploaded satellite images to Google Earth reveal what appears to be a Hizbullah terror training ground constructed after the 2006 Lebanon War.

According to military analysts, the facility near Janta in the Bekaa Valley includes a suspected driver training course, a 100-meter firing range, and a possible urban terrain assault course.

Reports in the Lebanese media a few weeks ago said Israeli war planes staged mocked raids over Lebanon, following concerns Hizbullah might attack Israel if asked by Iran. Israel has not commented.