Foreign Minister Avigdor Lieberman said Monday that Israel will not be “dragged into provocations with Turkey” over its indictment of four former senior IDF commanders. 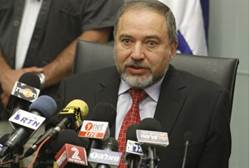 Meeting with German president Joachim Gauck in Jerusalem, Lieberman said, “We hope that European countries refuse to cooperate with Turkish authorities over these absurd charges against former IDF chief of staff and senior officers.”

“We hope to put relations with Turkey back on track, and avoid a diplomatic rampage by a member of NATO that has lost its direction and acts contrary to accepted international rules of conduct.

“Israel will continue to act responsibly, and will not be dragged into provocations with Erdogan, out of concern for peace and stability in the Middle East.

“However,” he warned. “Israel’s first concern is to maintain its sovereignty, protect its citizens, and will defend the soldiers who defend it.”

However, Lieberman warned, “Restraint does not mean that Israel will allow Turkey to intimidate her officers and soldiers, who act according to the highest ethical standards, with the full justification of international law, as determined by the report of the International Court of Justice, the Palmer Report, which detailed the IDF’s actions against terrorists on Board the Mavi Marmara.”

His remarks came after a Turkish court on Monday indicted former IDF chief of Staff Gabi Ashkenazi and three other former IDF officers on charges of manslaughter, in connection with their senior roles in the Israeli military during Mavi Marmara incident in 2010.

For his part, Askhenazi seemed little concerned by the indictment, saying “I am sure that at the end of the day, logic will prevail on this matter.”

Last September, the United Nation’s 105-page “Palmer Report” concluded that Israel’s naval blockade of Hamas in Gaza is both reasonable and legal, and said the IHH – the Turkish aid group that primarily organized the 2010 flotilla – had lain in wait for the commandos.

“Israel faces a real threat to its security from militant groups in Gaza,” the report says in its opening paragraphs. “The naval blockade was imposed as a legitimate security measure in order to prevent weapons from entering Gaza by sea and its implementation complied with the requirements of international law.”

“There exist serious questions about the conduct, true nature and objectives of the flotilla organizers, particularly IHH,” the report also said.

Nonetheless, the report faulted the IDF for “excessive and unreasonable” force, saying Israel should have issued warnings closer to the moment of action and should have first turned to nonviolent options.

The conclusion utterly ignored that the commandos who boarded the vessel were armed with less-than-lethal ‘pneumatic guns’ and that ‘live fire’ was only employed when those proved insufficient to stop the threat to life and limb they faced.

According to the IDF – and video of the incident – the lynch mob fired on the soldiers first, attacked them with metal clubs and knives, and threw one of them into the sea. It was only when the soldiers feared for their lives that they employed deadly force.

Three of the soldiers were recognized as being disabled following the confrontation.

Turkey rejected the findings of the Palmer Report amid a furious fusillade of bellicose rhetoric – including threatening to send warships to violate Israel’s naval blockade – and reduced diplomatic ties with Israel.

During their meeting Lieberman and Gauck spoke warmly about Israeli-German relations and agreed there is a real sense of friendship between the two countries.

Lieberman stated that the good relations between the countries have borne fruit, as evidenced by the first round of a youth exchange project that concluded successfully last weel. He emphasized the importance of such projects in strengthening and tightening of relations between Berlin and Jerusalem.

The two also discussed Israeli relations with the Palestinian Authority, the ongoing Arab Spring, violence in Egypt and Syria, and Ankara’s behavior towards the European Union and Israel.

by Daniel Pipes National Review Online May 29, 2012 The fetid, dark heart of the Arab war on Israel, I...