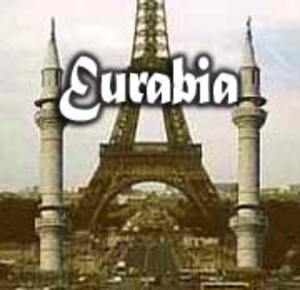 The Telegraph recently made headlines with a survey that suggested that a fifth of the European Union will be Muslim by 2050. This is if anything an understatement of the situation, since once you subtract Eastern European states and focus in on Western European countries such as England, France and Italy… or Sweden, Islam will comprise a sizable enough minority to be considered a state within a state. And even the most pessimistic statistics will grow gloomier if 75 million Turks inside the presently Islamist Turkey will become part of the European Union.

Meanwhile always eager to get ahead, Russia estimates that Islam will become its predominant religion by 2050. The Russians, both under the USSR and in the Putin era, have done everything they can to try and raise the birth rate, but remains at half that of Uzbekistan, or even war torn Chechnya. With the Russian population set to fall by almost 50 million, to 100 million in 2050, the Muslim birth rate will have made up the surplus. Having tried all the usual financial family incentives and even made an effort at luring back its former Jewish emigrants, Russia is now counting on its state run network of mosques, which can only preach Jihad at America, England and any non-Russian infidels, to maintain control. It is an absurd strategy, but no more so than Europe’s own.

While Europe may not boast a population that is by turns dying of alcohol poisoning or trying to escape abroad—Europe is dying the slow death of socialism instead. High taxes, late marriages and the accompanying low birth rates have hit Europe hard. And attempts to compensate for gaps in the workforce during economic upswings with immigration, has imported the barbarians through the gate, past customs and into every major European city.

The old European is likely to live comfortably, to go abroad on vacations and have plenty of time for hobbies and entertainments. And to be child free, or perhaps one or two indifferently pampered children, if they can find the time. The new European is likely to be named Mohammed, to have twice as many children, if not twice as many wives, and to spend less time entertaining himself at operas and on vacations, and more time building a future for his family.

The old European is likely to have a limited interest in church or synagogue. His children may even hold an open hostility toward organized religion. The churches and synagogues will pursue his grandchildren with all sorts of gimmicks in the hopes of getting them to show up, but even if they do, there will be very little there to hold them. The new European will have a steady mosque. Outside the mosque he will listen to Islamic lectures on his media player or cell phone. Family ties will create strong religious bonds through the next generation, and there will always be a brother with a shiny knife for any daughter who stays off the path.

The end result is not very hard to project at all. Europe’s left of center parties have embraced Muslims as a voting public, speeding their legalization, and what can only be euphemistically described as integration. But it is not so much Muslims being integrated into Europe, as Europe becoming integrated into the Islamic Ummah.

Europe’s governments have increasingly chosen to bow to the inevitable, accepting the reality of a Muslim takeover, while imagining that it can happen on their terms. From finding common ground with domestic Muslim populations through Europeans accepting some Muslims customs, while Muslims in turn accept some European practices; to madder schemes such as Sarkozy’s Mediterranean Union—all these are attempts by dying European states to cope with the coming reality of a Muslim Europe.

Such plans all center on the fallacious premise that a non-Muslim minority can rule over a Muslim majority through anything but constant subterfuge or brute force, the two elements that Russia has been steadily applying to try and control its growing Muslim population.

The European states putting their hope in integration are missing out on the reality that they’re trying to bail out the boat with a bucket that has a hole in it. When Muslims are successfully integrated, their birth rate drops. This might sound like a good thing, but all it means is that the old fashioned kind of Muslims will always out-reproduce both Europeans and any integrated Muslims. From the standpoint of natural selection, integrating Muslims confers Europe’s birth rate disadvantage on them. Meanwhile there will be no shortage of Pakistani, Moroccan, Somalia and assorted other old fashioned Muslims just off the boat, and eager to take the infidel and any of his lackeys for all they’ve got.

Furthermore one cannot wave a magic wand and solve the Ummah problem with some mingling or a headscarf ban. There are cultural and religious divisions that will not be easily leapfrogged with all the well meaning rhetoric in the world. Particularly when that well meaning rhetoric continues to insist that there’s nothing the matter with Islam in the first place, and that any proposed solution should involve teaching Europeans to be more tolerant. Well Europeans have already learned to tolerate millions of Muslims. By 2050 their tolerance will be getting a real workout. Of course by then it will mainly be a question of Muslims learning to tolerate them. Arguably that is the question already.

So what does the future hold for Europe? Constantinople offers some clues, but even with Turkey again on its doorstep, Europe is not Byzantium. There will be no wars, only a slow gradual takeover that is well under way.

The attempts to find common ground on the European side, are nothing more than a transition to Islamic rule on the Muslim side. It is a transition that begins with European institutions adapting to Muslim customs and laws. Much as colonial institutions evolved and took over from European ones, the process will continue within Europe itself, as banks, police forces and social services agencies will become more and more Muslim.

Muslim holidays will take on a public profile equivalent to those of native ones. Muslim prominence in politics will rise, moving from position to position. Muslim councilors will give way to Muslim mayors to Muslim prime ministers. It will of course all be done with a great deal of talk about how wonderful all this change is, and how tolerant and open we are now. “Isn’t it historic this new Europe”, they will say. And it is historic indeed. There are historic occasions at the end of history, just as there are at the beginning. And an excess of historic occasions always raises the question of whether it is the beginning or the end of a history which we bear witness to.

All the history of course will not blot away all the violence. Muslim areas will expand as black holes of crime, governed by no police but Muslim police. There bombs will be built, rabid sermons delivered, stolen cars dropped off at chop shops and drugs smuggled through for distribution outside its borders. Murders, gang rapes, and every sort of crime will happen there without knowledge or recourse. These black holes will also pour forth a constant outcry of racism. And every now and then when the mood strikes them, the “youth” will pour forth to burn and loot.

In time the cries of racism and the riots will give way to calls for an autonomous territory, a state within a state. And the politicians will nod their heads and say, “Yes, this is the best solution to the problem. It isn’t as if we control the territory as it is.” And then Europe will have its own Palestinian states in Paris and Oslo, in Manchester and Brussels. States that will soon become countries in waiting, from which rockets will shell, suicide bombers will go forth, and the blood will flow, until enough compromises are made to Sharia law and to Muslim rule, that Europe will finally become Eurabia.

The date cannot be predicted with any degree of certainty. The larger variable is immigration which hinges on global economics and domestic policy. The smaller variable depends on third and fourth generation Muslim birth rates. And then there are the wild cards, Turkey’s admission to the EU, a nuclear war between India and Pakistan, the collapse of Iraq sending forth a new flood of refugees, and many others. There is the yet uncertain question of what percentage of Europeans will adopt Islam. And there is the question of what impact European emigration will have on these figures. But predicting dates is for fortune tellers. Predicting trends however does not require a crystal ball, but the ability to calculate the forward motion of moving objects.

As long as the European birth rate keeps falling, and Europe’s borders remain open, and its politicians remain unwilling to begin exporting its former guest workers back to their countries of origin, Europe is doomed. The date may be unknown, but the trajectory is all too unfortunately clear.

When it comes to Muslims, Europe, Israel, America and every country infected with the Islamist plague retains only one real option, to deport them or to surrender to them. Europe has chosen to surrender. Israel has chosen to partition itself, thereby only dragging out the pain. America has chosen to pretend the problem doesn’t apply to it. And by doing so, all of them are paving the way for their own destruction.

By Daniel Greenfield a New York City based writer and freelance commentator. “Daniel comments on political affairs with a special focus on the War on Terror and the rising threat to Western Civilization. He maintains a blog at Sultanknish.blogspot.com.

After the Fukushima reactor disaster, Japan appeared to be through with nuclear power. This however left the issue of energy...