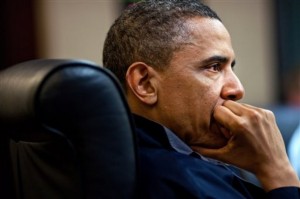 Hear the latest news? JPMorgan, another Wall Street bailout, is reporting losses that could top $3 billion. Yet, in the face of this news, President Obama praised the bank and its CEO saying, “JPMorgan is one of the best-managed banks there is.” Could the more than $800,000 JPMorgan Chase employees donated to him in 2008 have anything to do with this bizarre affinity for failure?

This is just one more example of Obama’s cozy relationship with Wall Street. Desperate for their money and support, the Obama administration looks the other way with every Wall Street indiscretion. Obama promises to get tough on Wall Street but his actions tell a different story. He’s not out of touch. He’s an opportunist.

Fed up with Obama’s hypocrisy, American Future Fund has gone to the airwaves with this ad, exposing Obama’s close ties to Wall Street.

The ad points out that not a single senior Wall Street executive has been charged with a crime, nearly four years after America’s financial collapse.

Could it be because Obama raised $49 million from Wall Street? He rewarded top Wall Street donors and supporters with senior jobs. His Chief of Staff made millions from Wall Street – after Wall Street received billions in bailout money. Top Obama donor, Jon Corzine, former Senator and New Jersey Governor, has lost $1.6 billion in customer money, but hasn’t been charged. He has raised over $500,000 for Obama.

Keep this ad on the air by donating to American Future Fund today.

Obama has been a vocal critic of Wall Street, claiming he wasn’t elected to help “fat cat bankers on Wall Street.” But his past and present tell a different story.
Obama voted for the Wall Street bailout and accepted more campaign cash from Wall Street than any other candidate in history.

It’s easy to be a critic of convenience. Except when a mountain of evidence tells a different story. President Obama may be trying to deny his support of Wall Street but Wall Street sure supports Obama.

The Telegraph recently made headlines with a survey that suggested that a fifth of the European Union will be Muslim...