It’s not every day Queen Elizabeth invites a British citizen from Israel to garden party, but Lucy Fensom’s charity for donkeys apparently was enough to prompt an invitation to last week’s event as Britain celebrates the Queen’s 60 years as monarch. 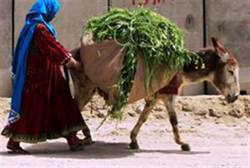 A woman with a donkey carrying grass

She invited Fensom in recognition of  her ‘Safe Haven for Donkeys in the Holy Land’ charity on behalf of “donkeys in distress in Israel.”

The Safe Haven began 12 years ago and now is home to 165 donkeys.

“It was such an honor to be invited to the Queen’s Garden Party, especially so close to the Jubilee,” Fensom told Britain’s Mid-Sussex Times. “The magnificent setting couldn’t be more different to our donkey sanctuary out in Israel but it was wonderful to be there and to talk to our Royal Patron, HRH Princess Alexandra, about the latest news from the sanctuary.”

A Christian, she first visited Israel in 1989 to work for the Jerusalem Society for the Protection of Animals. She wrote on her website, “It was whilst working there that I first encountered the terrible cruelty inflicted on working animals throughout Israel and Palestine and the incredibly harsh lives they lead day after day.”

“One encounter with a badly wounded animal, who I named Donk, resulted in my purchasing him from his Bedouin owners and transporting him back to England to spend the rest of his life happily and peacefully at a sanctuary in Cambridgeshire.”

She returned to Israel with an intent to stay, renting a small barn on a kibbutz and began to collect donkeys.

The Safe Haven how has “160 resident donkeys, four horses and two mules” and runs a clinic in the Arab city of Kalkilya, located next to Kfar Saba, on the northern edge of metropolitan Tel Aviv.

Donkeys are often significantly mentioned in the Bible, one of the most famous passages being the “talking mule” of Bilaam, whose insistence to travel to Balak and curse the Jews was thwarted by his faithful donkey, which refused to continue and the complained to Bilaam when he hit it without seeing a messenger of HaShem on the road.

Mules are a common from of transportation as well as the “beast of burden” for thousands of Arabs today. Fensom writes, “Rescuing animals who are destined to die of starvation after being abandoned on busy roads or who are too ill or old to work anymore is only a part of my work – my long-term aim is to change attitudes through education and care, teaching that love and respect for your animal will bring rewards all round as many families rely on their donkey as their only form of transport for earning a living to put food on the table.”

Time to Return ARPA-E to Its Original Mission

Despite having a budget for only a few years, the Advanced Research Projects Agency-Energy (ARPA-E) is quickly becoming a microcosm...