Calling them “persona non grata,” Syria today told 17 diplomats — including the U.S. ambassador — that they are no longer welcome in the country. 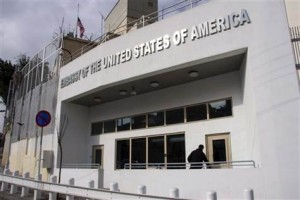 over the massacre in the Houla region, near Homs, that left 108 people dead, including many women and children,” as The New York Times writes.

The U.S. embassy in Damascus has been closed since February.

The BBC says the diplomats on the list are from “the U.S., U.K., Switzerland, France, Italy, Spain, Belgium, Bulgaria, Germany and Canada.”

Those are among the nations that have been most vocal in condemning the Assad regime’s crackdown on dissent in Syria, which has led to the deaths of thousands of Syrians. The regime blames “terrorists” for the violence.

Sen. Rob Portman of Ohio, eyed as a potential running mate for Republican presidential nominee Mitt Romney, wrapped up a...