An Islamic extremist group called Hizb ut-Tahrir that opposes democracy and supports violent jihad, including the killing of U.S. soldiers, is coming to Rolling Meadows, Illinois on June 17. The conference, titled “Revolution: Liberation by Revelation–Muslims Marching Toward Victory” is about how Muslims must help resurrect the Caliphate and institute Sharia-based governance.

If you wish to express your opinion to the Meadows Club, the business can be contacted at [email protected] or called at 847-640-3200.

In 2010, Hizb ut-Tahrir’s annual conference at the Chicago Marriott Oak Brook hotel was canceled after the venue dropped the group’s reservation.

Hizb ut-Tahrir (HUT) was founded in 1953 in East Jerusalem when it was under the control of Jordan. It was begun by a former member of the Egyptian Muslim Brotherhood named Sheikh Muhammad Taqiuddin al-Nabhani. He also worked with with Haj Amin al-Husseini, a cleric who is most famous for his close alliance with Hitler. HUT came to the U.S. in the early 1990s under a front called “Walnut,” or the Islamic Cultural Workshop. HUT now operates openly in the U.S.

Zeyno Baran, an expert on Islamist groups, calls HUT a “conveyor belt for terrorists.” Multiple members have been radicalized by its preaching, which gives Muslims every reason to become violent, and gone on to commit terrorism. Examples include Abu Musab al-Zarqawi and Khalid Sheikh Mohammed.

What makes the Meadows Club’s hosting of HUT especially outrageous is the fact that HUT is outwardly anti-American and jihadist. The promotional video for the conference features a clip of a protester in the Middle East declaring, “We are here to say that we want to reestablish an Islamic state with Sharia as the “only source of legislation.” This is followed by a clip of an Egyptian cleric preaching, “Oh Muslims! Rise up to aid and support the call for Khilafah [Caliphate] even if it is at the expense of your lives.”

Hizb ut-Tahrir says that it is non-violent, but the reality is more complicated. It does not engage in violent jihad as an organization but that doesn’t mean that it opposes violent jihad by its members on their own accord or by other groups. Its website explains:

“So whenever the disbelieving enemies attack an Islamic country it becomes compulsory on its Muslim citizens to repel the enemy. The Hizb ut-Tahrir in that country are part of the Muslims and it is obligatory upon them.to fight the enemy and repel them. Wherever there is a Muslim amir who declares jihad.the members of Hizb ut-Tahrir will respond in their capacity as Muslims in the country where the general call to arms was proclaimed.”

HUT’s Facebook page links to an article by “Hizb-ut-Tahrir Publications” about jihad. It opens with Quran 9:29: “Fight those who believe neither in Allah nor the Last Day.until they pay the Jizya [a special tax for non-Muslims] with willing submission and feel themselves subdued.” Non-Islamist Muslims may have a passive interpretation of this passage’s meaning, but Hizb ut-Tahrir’s threatening interpretation is clear.

The author of the article fondly recalls the “days when the Islamic Ummah [the Muslim community] was an ummah of jihad” and how “the Jihad of the Muslims imprinted in the minds of the Europeans the notion that the army of Islam is invincible.” The power of the Muslim world has fallen because Muslims “relinquished jihad.”

The group has called for killing U.S. soldiers specifically. In January 2010, it accused the “U.S. crusaders” of massacring Afghan children and stated that it must “be answered by sharp swords of Muslim united armies under true Muslim leaders.” The invitation to an HUT conference in Denmark in January 2011 mentioned “the duty of armed resistance of the Muslims in Afghanistan and its environs. We consider this resistance as fully legitimate.” HUT has also published materials supporting jihad against U.S. and Coalition forces in Iraq.

After the bombings in London in 2005, a top HUT official was asked to condemn them. His response was that he’d “condemn what happened in London only after there is a promise from Western leaders to condemn what they have done in Falluja and other parts of Iraq and in Afghanistan.” Its Facebook page has promoted an anti-democracy lecture by Anwar al-Awlaki, the Al-Qaeda leader who was killed in a drone strike in Yemen in 2011.

The vilest rhetoric is directed at Israel and Jews as a whole. A HUT document reads, “if the plane belongs to a country at war with Muslims, like Israel, it is allowed to hijack it, for there is no sanctity for Israel or for the Jews in it.” A HUT spokesman in Denmark distributed a leaflet that instructed Muslims to “kill them all [Jews], wherever you find them” and endorsed suicide bombings against Israel as acts of “martyrdom.”

After the Turkish flotilla incident in 2010, HUT’s branch in the U.S. supported violent retaliation. “There is no solution except to mobilize armies, gathering the capable soldiers and fight the Jews.” It criticized Pakistan and Iran for not attacking Israel. “O you possessors of the missiles that you boast can blow ‘Israel’ off the map, so where are you now, O Pakistan and Iran’s rulers?” it asked.

The Pakistani branch of HUT told the country’s military must “prepare nuclear bombs and other weapons for Jihad.fight under this command to annihilate Israel.” The Bangladeshi branch said Muslims must “eradicate Israel and purify the earth of Jewish filth.” 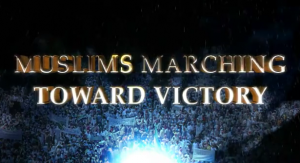 HUT also supports violent jihad against India. In July 2011, the Pakistani HUT believes “The only way Kashmir can be liberated is through organized jihad under a state that mobilizes the armies.” Its journal from December 19995 said “Muslims need swords, not candles” in Iraq and the Palestinian territories. HUT leaders have also been videotaped endorsing jihad in Chechnya and Kashmir.

The group is openly hostile to Western secularism and democracy. It does not even pretend to believe in the system. A speaker during its last conference in the U.S. admitted that HUT would dismiss the Constitution entirely and replace it with Sharia Law. One past edition of its publication compared the Founding Fathers to “tyrant dictators.”

A small sampling of the videos on the YouTube channel HUT used to post its advertisement for the Illinois conference confirms the group’s extremism. One video, titled “A Call to Jihad by Abu Abdallah Attempted Silence in a Jordanian Mosque,” tells Muslims that the U.S., U.N. and Europe are “enemies to Islam and Muslims.” The cleric is seen shouting, “Your covenant is not a civil state, secular state nor democratic state legislating on your behalf!” In another video, four young boys dressed in HUT gear call on Muslims to revolt in Morocco and re-establish the Caliphate.

During its conference last year near Chicago, HUT passed out a document explaining the structure of the future Islamic state. Article 7 states, “Those that are guilty of apostasy (murtad) from Islam are to be executed according to the rule of apostasy, provided they have themselves renounced Islam.” The proposed Caliphate will have an Internal Affairs Department with a division devoted to investigating apostasy. It also sketched out several top posts dedicated to waging jihad.

The group’s branch in Indonesia is currently outraged at a bill that would promote women’s rights, especially a part that allows women to freely choose who they want to marry. HUT’s branch in Indonesia wants to stone and cane celebrities that make sex tapes, censor the Internet according to Sharia law, stone adulterers to death and punish those that have sex outside of marriage by caning them 100 times in public.

This is what is coming to Rollings Meadows, Illiniois on June 17. Let the Meadows Club know how you feel about and if you’re a local resident, how it’ll affect your business there.

Ryan Mauro is RadicalIslam.org’s National Security Analyst and a fellow with the Clarion Fund. He is the founder of WorldThreats.com and is frequently interviewed on Fox News.

This article was sponsored by the Institute on Religion and Democracy.