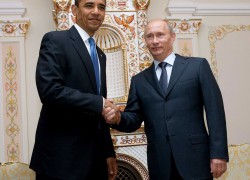 Congressman Mike Turner (R–OH) recently released a video asking what secret deal with the Russian Federation President Obama had in mind when he told Russian Prime Minister Dmitri Medvedev that he will have “more flexibility” after the election. Turner’s efforts are warranted, because the American people place a fundamental trust in the President to do all within his power to defend them against foreign military threats. President Obama is indicating his willingness to bargain away U.S. missile defense whenever he gets the chance.

No number of high-level briefings and no amount of information can satisfy Russia’s misplaced objections to the U.S. missile defense system. Fundamentally, Russia intends to keep Americans and U.S. allies hostage to its ballistic missile threat.

Recently, Russian Chief of General Staff Nikolai Makarov threatened a pre-emptive nuclear strike if the United States proceeds with its Phased Adaptive Approach, a missile defense plan for the protection of U.S. allies and the U.S. homeland in its later stages. This is outrageous, since missile defense interceptors do not have offensive capabilities and would be used only in the case of a ballistic missile en route toward its victims—be they in Berlin, Paris, or New York. No leader will choose to sacrifice millions of lives just because a launch location happens to be in Russia.

Yet President Obama cut funding for the missile defense program in his first year in office and cancelled some of the most promising technologies: the Multiple Kill Vehicle, the Airborne Laser, and the Kinetic Energy Interceptor. President Obama also decided not to procure the Medium Extended Air Defense Systems developed jointly with Italy and Germany. As the ballistic missile threat keeps growing qualitatively and quantitatively, this is not the time to undermine U.S. missile defense capabilities and alliance commitments.

by Ryan Mauro An Islamic extremist group called Hizb ut-Tahrir that opposes democracy and supports violent jihad, including the killing...