Iranian president Mahmoud Ahmadinejad says Tehran has no intention of building nuclear weapons – but fear is not the reason. 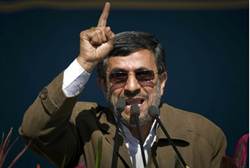 Ahmadinejad’s comments ahead of June 18-19 talks with world powers over Tehran’s nuclear program marked a toughening of rhetoric.

The P5+1 – the five permanent members of the UN Security Council plus Germany – want Iran to shut down its highest level uranium enrichment facilities.  Ahmadinejad’s remarks suggest Iran would refuse.

The US and its allies suspect Iran is seeking to develop nuclear weapons. Iran insists its nuclear program is for peaceful purposes like power generation and cancer treatment.

However, nuclear proliferations experts say Iran’s enrichment of uranium to 20% purit – a key jumping off point should Iran make a sprint for 90% weapons grade material – far exceeds what Iran would need for medical isotope research.

Of note was a high-explosives test chamber at the Parchin military base outside Tehran, where IAEA inspectors believed Iran was attempting to develop a nuclear trigger.

Tehran says Parchin is a conventional weapons facility, and insists the Iranian nuclear program is peaceful.

However, satellite photographs of the site taken on May 25 show two buildings at Parchin the IAEA had sought access to had been razed over by Iran.

“These activities raise further concerns of Iranian efforts to destroy evidence of alleged past nuclear weaponization,” the Washington-based ISIS said in a six-page written analysis.

An orthodox police recruit has been fired from the NYPD academy for refusing to trim his beard to the regulation...