The United States said Monday it would exempt seven emerging economies, including India, from tough new sanctions after they cut back on oil from Iran, AFP reported. 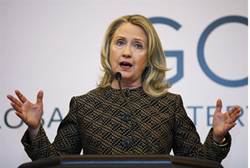 U.S. Secretary of State Hillary Clinton added India, Malaysia, South Africa, South Korea, Sri Lanka, Turkey and Taiwan to the list of those exempt from the sanctions. In March, she made exemptions for European Union nations and Japan.

Under a law approved last year that irritated some U.S. allies, the United States, starting on June 28, will penalize foreign financial institutions over transactions with Iran’s central bank, which handles sales of the country’s key export.

Clinton said the seven economies exempted on Monday have all “significantly” reduced crude oil purchases from Iran. She cast the exemptions as proof of success in the U.S. campaign to put pressure on Iran’s clerical regime which is feared to be seeking a nuclear bomb.

“By reducing Iran’s oil sales, we are sending a decisive message to Iran’s leaders: until they take concrete actions to satisfy the concerns of the international community, they will continue to face increasing isolation and pressure,” Clinton said in a statement quoted by AFP.

The United States did not announce an exemption for China, which is heavily dependent on oil from Iran and elsewhere to power its giant economy. Officials said that the United States remained in talks with Beijing.

“We have informed our Chinese colleagues fully about the scope and urgency” of the sanctions, a senior U.S. official was quoted by AFP as having told reporters.

Clinton, in her statement, renewed her call on Iran to “engage seriously” to resolve international concerns.

“Iran has the ability to address these concerns by taking concrete steps during the next round of talks in Moscow. I urge its leaders to do so,” Clinton said, according to AFP.

Iranian negotiator Ali Bagheri warned on Sunday that the talks in Moscow could stall because of faulty preparation. He made the complaint in a letter to senior EU official Helga Schmid on Sunday.

“The next round of talks in Moscow will be successful provided that deputies and experts are able to prepare a specific agenda on the basis of Iran’s proposals and those of 5+1,” he wrote in his letter, referring to the five permanent members of the U.N. Security Council and Germany.

“If agreements at each round of talks are not pursued by deputies and experts in an appropriate manner, what will be the guarantee for success of the upcoming talks,” he added.

“Iran is ready to pursue negotiations in Moscow, and even in Beijing, and has made good proposals,” Ahmadinejad said in the Chinese capital.

“But taking into account that, after a meeting in Baghdad and, in conformity with what was agreed, our efforts to arrange a meeting between the deputies of (EU foreign policy chief Catherine) Ashton and the deputy of (Iranian negotiator Saeed Jalili) have not been successful, we consider that the West is looking for excuses to waste time,” he added.

Meanwhile, the UN’s nuclear watchdog and Iran failed on Friday to agree on a deal allowing greater access to Tehran’s contested nuclear program.

The expiration of the production tax credit (PTC) for wind and other renewable energy sources is the subject of intense...