Obama announced Friday it will stop deporting illegal immigrants who come to the country at a young age.

The politically charged decision comes as Obama faces a tough reelection fight against Republican Mitt Romney, with Hispanic voters in swing states seen as a key bloc. Speculation is this is desperate move to gain the 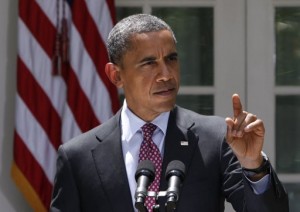 Obama has been losing his Hispanic base as Obamacare mandates force Catholic institutions to offer abortion procedures, something the Hispanic Catholic base has not agree with.

The change in the Immigration policy could allow as many as 800,000 illegal immigrants who came to the United States, not only to remain in the country without fear of being deported, but to work legally, according to a senior administration official speaking to reporters Friday.

Sen. Lindsey Graham (R-S.C.) said the Obama administration’s announcement that it would stop deporting illegal immigrants who come to the country at a young age is “possibly illegal”.

“President Obama’s attempt to go around Congress and the American people is at best unwise and possibly illegal,” Graham said in a tweet.

“This type of policy proposal, regardless of motivation, will entice people to break our laws,” Graham said in another tweet.

Last summer in a speech to La Raza in July, Obama said that on the question of immigration reform, “some people want me to bypass Congress and change the laws on my own.” Obama said he found the idea “very tempting” but had to reject it because “that’s not how our system works. I guess Obama has changed his mind?

At the time, Obama conceded only that changes require the approval of Congress. “We live in a democracy, and at the end of the day, I can’t do this all by myself under our democratic system,” Obama said. “If we’re going to do big things — whether it’s passing this jobs bill, or the DREAM Act, or comprehensive immigration reform — we’re going to have to get Congress to act.”

Regardless of what side if the immigration debate youre on, you should be enraged at what Obama has done this while bypassing congress. Obama with a now bolder stance said earlier this year speaking of his intention to implement his economic policies with or without the approval of Congress, “And where Congress is not willing to act, we’re going to go ahead and do it ourselves.”

“Excuse me sir, this is not time for questions sir,” Obama said to a reporter who asked a question during his Rose Garden speech on this new immigration policy. “Not while I’m speaking.”

Now over the next couple of weeks, we will be talking about immigration, an issue Obama feels more confidence in talking about vs the economy and Obamacare that may be stricken down by the Supreme Court any day.

The decision by the Supreme Court regarding the fate of Obamacare was made by the Justices weeks ago. The initial...