Officials with the Turkish Islamist group IHH denied on Friday claims that an official investigation has been launched against IHH President Bülent Y?ld?r?m over alleged links to al-Qaeda. 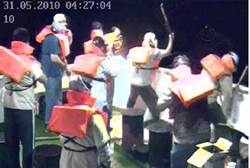 Terrorists on the Mavi Marmara

Osman Atalay, an IHH board member, told the Turkish-based Today’s Zaman in response, “Mr. Y?ld?r?m has not been summoned to testify or served any court document. We have not received any official information regarding an investigation. The newspaper hasn’t been able to provide any documented proof as to such an investigation either.”

Today’s Zaman reported that the IHH also announced, through its official Twitter account, that the reporter from the Turkish Habertürk daily who wrote the story stated that prosecutors and police officials had refuted it.

In 2010, the IHH funded a flotilla aimed at breaking Israel’s naval blockade of Hamas-controlled Gaza. Dozens of far-left American and European activists joined the cause.

One of the boats in the flotilla, the Mavi Marmara, refused to turn aside when ordered to, attempting instead to break the blockade by force. When IDF soldiers boarded the ship they were violently attacked. Soldiers opened fire in response, killing nine Turkish activists.

In Case You Missed It:  NEVER FORGET: On This Day 19 Years Ago 2,977 Americans Were Murdered in the Name of Islam
Posted in Terrorism and tagged al-Qaida, Gaza, Hamas, Islam, Israel, Jihad, Military, Muslims, Palestinians, Terrorism, Turkey.