A terrorist claiming to be linked to Al-Qaeda has taken four hostages and demanded to speak to the police who killed Islamist Mohamed Merah. 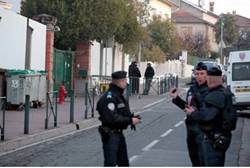 Among the hostages being held is the director of the bank, a branch of CIC. Police have thrown a dragnet around the area of the bank, according to the Quest-France newspaper.

The man was reported to have entered the bank, located about 100 meters (330 feet) from Merah’s apartment.

Merah is the terrorist who murdered a rabbi and three Jewish children in March at the Otzar HaTorah day school in Toulouse.

He also murdered three French Muslim paratroopers of North African descent in the week prior to that.

Merah claimed to have been taught by Al-Qaeda in special terror training camps abroad. His brother was later indicted for sending others to similar camps.

The bloody rampage was stopped on March 22 by an elite unit of French special ops police who surrounded his apartment in a 30-hour siege. The 23-year-old terrorist, a French citizen of Algerian descent, initially agreed to surrender but then reneged on the deal and instead died in a hail of bullets when he tried to escape by jumping out the window.

Merah’s father recently filed a lawsuit against the French police unit that killed his son, charging the officers with murder.