UNESCO opens a regular session Sunday to consider 31 new sites for its World Heritage List – including the Church of the Nativity. 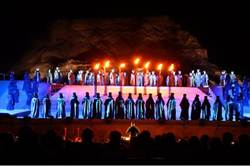 The windswept Judean desert fortress of Masada along the shores of the Dead Sea is already a UNESCO World Heritage site.

The United Nations agency, which is considering sites that are primarily in need of emergency status, is meeting in S. Petersburg until July 6.

It is the first time that Russia is hosting the World Heritage Committee session – and the first time the committee is considering any site labeled with the geographic location of “Palestine” as an independent sovereign nation.

Israel and the United States, among others, have objected strenuously, as they did when UNESCO voted 107-14 last year to recognize the Palestinian Authority as the country of Palestine and admit it as a member despite the refusal of UNESCO’s own parent body, the United Nations, to do so.

Should the committee decide to grant the church official status by adding it to the World Heritage List of endangered sites, UNESCO will have by default enabled the Palestinian Authority to gain official international recognition as an independent sovereign nation.

A number of legal analysts also have said the move may de facto dissolve the Oslo Accords, which mandate that all final status issues be resolved through negotiations between Israel and the Palestinian Authority.