The United States and Israel are planning war games involving simulated attacks against Iran and Syria. Coincidence or not, the exercises will take place less than a month before elections November 6. 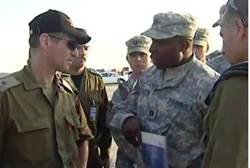 Israel and US officers in joint drill

Thousands of soldiers will participate in the war games under simultaneous and simulated missile fire from Syria and Iran, the Hebrew language Maariv newspaper reported. It said that the exercise will be named “dress rehearsal,” a thinly veiled message to Iran of the possibility of a military attack on its unsupervised nuclear program if Tehran does not cooperate with United Nations inspectors.

President Barack Obama is seen as wanting to postpone any military action until after the elections, in which he will be running for re-election against Republican Mitt Romney.

Iran has suffered numerous cyber attacks in the past year, presumably originating from Israel and the United States, in an effort to cripple computer programs operating nuclear facilities, particularly those where Iran is enriching uranium, a key element for a nuclear weapon.

On the military front, Israel has beefed up its submarine force, which is reportedly equipped with nuclear weapons.

Recent U.S. defense contracts to arm its navy with more Tomahawk cruise missiles may possibly be intended to deplete reserves that were used for bombing missions against Muammar Qaddafi but also may be designated for a future attack, Business Insider noted.

“Taking out radar and aircraft defenses would be one step in an Iranian attack. Another, equally as vital, would be determining where Tehran’s fleet of submarines may be parked in the Persian Gulf,” it said.

The U.S. Navy also has ordered 17,000 sonar buoys that are used to work with other buoys to locate underwater objects but also might be intended for research for an unknown mission.

Hank Campbell: IPCC Gives Up On Science, Makes Grey Literature Official. Poor hank. He thought the IPCC was a science-based...