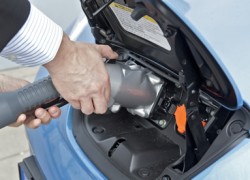 How would you like to buy a nice compact car with a two-gallon gas tank? It costs only $36,000, and it takes seven hours to fill the tank.

Secretary of Energy Steven Chu wants lots of those cars, though he insists they will be $10,000 cheaper.

The car alluded to is the all-electric Nissan Leaf. With a driving range of 73 miles, the Leaf will go as far as its Nissan Versa cousin goes on 2.2 gallons. If that isn’t inconvenient enough, please note that, with the virtually mandatory $2,200 home recharging station, the Leaf takes seven hours to recharge.

It’s unlikely that many people would buy a Versa if it had a two-gallon tank, even though, in comparison to the Leaf, the refilling options are infinite and the refilling time is infinitesimal. They certainly wouldn’t if the version with the smaller gas tank cost $17,000 more.

Of course, the one advantage the Leaf has over the Versa is that electricity costs about $1.25 for the equivalent of a gallon of gasoline. This raises the question of how much driving it would take to make the Leaf more economical.

Assuming that the Leaf plus the recharging station qualifies for $8,200 of tax credits, the net cost will be a nice round $30,000. Making the generous assumption that the Leaf is financed for 10 years at 6 percent, the annual premium for the Leaf over the $13,900 Versa works out to $2,215 per year.

In Case You Missed It:  California State University’s Mandate of Ethnic, Social Justice Studies Driven by Hatred of America

Of course, there are some people who drive more than 24,000 miles per year, but very few do so without exceeding 73 miles in any given day. The long recharge time makes it nearly impossible to do more than that. So if there is somebody who drives at least 66.7 miles every day without ever driving over 73 miles on any day, the Leaf might make sense. But this case is even less believable than it appears, because the car would have to last 240,000 miles.

As a non-car-owner, Secretary Chu may be forgiven for not thinking through the actual costs of his plan. On the other hand, maybe he just shouldn’t be making the plans for those of us who do buy cars.

This extremely disturbing video shows what happened when a group of Christians tried merely to hold up signs about Christianity...