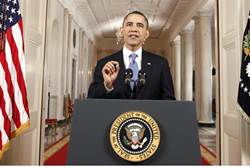 For Roberts, the Federal government’s power to tax conferred legality upon the law. If the public was convinced it was a bad law, he argued, then it could replace the representatives who drafted and passed it. That is the democratic way.

The Republicans have seized upon this twist and have accused the Democrats of misrepresentation by selling the bill under the right to regulate commerce, when it was in reality a tax –  and therefore Roberts may have handed the Republicans a weapon. Louisiana Governor Bobby Jindal was quick off the mark:

“Ironically, the Supreme Court has decided to be far more honest about Obamacare than Obama was.  They rightly have called it a tax.”

It is not yet certain who will be the ultimate victor of today’s ruling. One could make a case that a ruling that the law was unconstitutional would have hurt Obama. The president expended time and political capital on it, when he could have had his eyes on the economic ball. Since it is now standing, one could score the ruling as an Obama win.

On the other hand, Mitt Romney has in the past few days continued to make the point that the law was time- ill spent. He stated, “if it is deemed to stand, then I’ll tell you one thing. Then we’ll have to have a president — and I’m that one — that’s going to get rid of Obamacare. We’re going to stop it on day one.”

The Republican candidate was quick to react to the decision and as usual linked it to his economic narrative. He called the bill a job killer that would increase the deficit and burden future generations with debt, while moving towards bigger and more intrusive government.  Americans now faced a stark choice. The only way they could effectively oppose the bill was to elect Romney in November.

Senate majority leader Harry Reid applauded the court’s decision and the law saying, “passing the Affordable Care Act was the greatest single step in generations toward ensuring access to affordable, quality health care for every American – regardless of where they live or how much money they make.”

For his part, Reid hopes that the matter is now settled. This was also the gist of Obama’s statement saying that he does not want to  “re-fight the political battles of two years ago or go back to the way things were,” because the country can’t afford to do so. “With today’s announcement, it is time for us to move forward to implement, and where necessary, improve on this law.”

The unpopularity of the law and its provision that, in order to have healthy people, everyone must have health insurance, helped mobilize Conservatives in the 2010 election.

The law could mean that taxes will be raised to insure individuals with chronic health problems.

Currently, polls  show there are more opponents of the law than supporters. The parties will be watching to see whether these numbers shift now that the court has spoken.