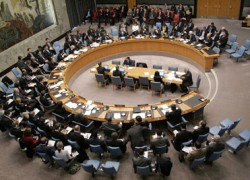 After a quiet afternoon Thursday, the third day of the U.N.’s Arms Trade Treaty conference closed with a bang.

The conference president, Ambassador Roberto Garcia Moritán, again tried to persuade the delegates to accept his proposal that, on Friday, they split into two working groups, one to consider the treaty’s scope and implementation and the other its principles and criteria.

And again, the dictatorial states—supplemented this time by a number of others—sprang into action: North Korea and Cuba hated the idea, Syria and Algeria pretended not to grasp it, and India and Portugal weren’t keen. Moritán’s normal style is urbane, if perhaps occasionally lacking in drive and direction, but by the end of this frustrating session, he was reduced to talking to Syria as to a small, stupid child that had to be addressed slowly and using only very short words.

In the end, Moritán, with ill grace all round, got his way. But the exchanges illustrated a few truths that became more obvious on the fourth day. The conference is far too large to work efficiently, but in one way the dictators, though not acting in good faith, are right: It makes little sense to try to work out how the treaty will work separately from what it is trying to achieve.

And as speech follows speech, it becomes obvious that few nations share the U.S. belief that the objective of the treaty should be to try to keep arms away from governments that abuse human rights. The majority of nations want it to focus instead on the illicit arms trade, meaning the arms trade that national governments do not control.

This was perfectly predictable, because keeping arms away from human rights abusers would mean keeping them away from much of the U.N. By contrast, focusing on the illicit arms trade means denying arms to anyone who challenges the authority of national governments—and there are many governments at the U.N. who like that idea a lot.

In previous sessions, Cuba, Egypt, and Saudi Arabia had all put in strong showings with speeches that were unprincipled and autocrat-friendly, but when it came to crazy, Venezuela lapped the field with a speech that will be tough to beat.

In a lengthy rant attacking the “maturity” of the assembled nations, it denounced the “imperial powers” for arming the Libyan rebels who overthrew Muammar Qadhafi, demanded that the world look seriously at controlling the “imperialists” (i.e., the U.S.) who had nuclear weapons, condemned foreign aid providers for insisting on the “downsizing” of governments, and stated that it needed arms to deal with internal threats (i.e., to continue to oppress its own population).

In the late morning, the conference finally got down to something resembling substantive work. The informal session on the treaty’s scope was run more briskly than the plenary session, and early complaints from the Palestinians and Egypt were quickly brushed aside.

The U.S. made a strong and clear statement, pointing out the impracticality of including ammunition in the treaty and objecting to the inclusion of parts, components, and technology (as well as detailed definitions) in the treaty’s scope. On all these points, the U.S. was clearly in the minority. Regrettably, the U.S. did not pick up on Italy’s excellent statement urging the exclusion of hunting and sporting weapons from the treaty’s scope.

It is remarkable that Cuba believes it has anything to fear from the mostly left-wing, mostly European NGOs lining the back wall of the conference room, who tend to view the U.S. embargo as a far greater human rights offense than anything the Castro brothers have done. But Cuba obviously dislikes and resents their presence all the same.

There are good reasons to think that NGOs have done more harm than good in the world of diplomacy—but Cuba doesn’t dislike them because it thinks diplomacy is the job of democratically elected national governments. It dislikes them because it doesn’t like democracy or anything having to do with any kind of society that isn’t under its thumb.