Several hundreds of people staged a protest march in Pretoria, South Africa, against South Africa’s plans to label products made in Judea and Samaria as “Made in the Palestinian Territories.” 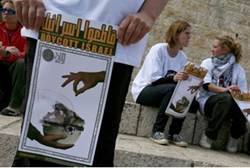 Around 300 members of the African Christian Democratic Party (ACDP) and the Inkatha Freedom party marched peacefully and handed over a petition against the labeling to the Ministry of Trade and Industry, spokesman Sidwell Medupe told AFP.

He later rejected “with utter contempt” suggestions that there were racial motivations for his move, saying his department was neither seeking to promote a boycott of Israeli goods nor to prevent the entry of such products into South Africa.

Davies asserted, however, that the move was aimed at ensuring that products were correctly labeled so that South African consumers could decide for themselves as to whether they wanted to purchase them.

Reverend Kenneth Meshoe, leader of the ACDP, has argued that “the South African government must not involve itself in the political agenda of organizations and anti-Israeli lobbies,” AFP reported.

Meshoe has also said that the decision is misleading and baseless, since the world does not recognize a country called the “Occupied Palestinian Territories.”

Israel’s former ambassador to South Africa, Alon Liel, said this week that he backs a boycott of goods made in Judea and Samaria.

In Case You Missed It:  A Decade After Obamacare Became Law, Rep. Cathy McMorris Rodgers Is Working to Fix Issues It Created

He added, “I cannot condemn the move to prevent goods made in the occupied Palestinian territory from being falsely classified as ‘Made in Israel.’ I support the South African government’s insistence on this distinction between Israel and its occupation.”

One of the more than two million emails from Syrian political figures, ministries and companies which WikiLeaks began exposing on...