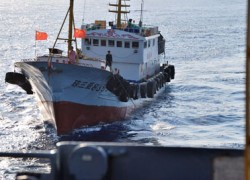 On June 28, during a press briefing by the Chinese Ministry of Defense, Chinese military press spokesman Senior Colonel Geng Yansheng released a bombshell. Asked by an unnamed correspondent about China’s response to Vietnamese air force patrols near the Spratly Islands, Geng made the usual declaration about China’s claims to indisputable sovereignty over the Spratlys and their “adjacent waters.” He then stated that the PLA had begun “regular, combat-ready patrols” in waters under Chinese jurisdiction. The implication is clearly that the Chinese navy is now regularly patrolling the waters around the Spratlys and possibly elsewhere in the South China Sea. This is an alarming escalation of China’s efforts to assert sovereignty over the South China Sea region. Until now, the various confrontations and incidents in the area—whether with the Philippines over Scarborough Shoal; the Vietnamese over oil exploration efforts; or the United States in the separate incidents involving the USNS Impeccable, USNS Victorious, and the USS John S. McCain III—have had only civilian participants. There is a bewildering array of Chinese bureaucracies, each of which assumes responsibility for only a portion of China’s maritime interests, including fisheries, agriculture, and the State Oceanic Administration. While this has raised questions about inter-agency coordination in China, the PRC’s use of non-military vessels to make its point regarding sovereignty has also limited the potential for escalation. With the decision to begin regular naval patrols, however—and especially “combat-ready (zhanbei)” ones—the potential for escalation is far greater. Even more disturbing is that this measure seems to be part of a larger Chinese effort to exercise full sovereignty over the area. In mid-June, the Chinese State Council established a city-level administration over the various islands and waters of the South China Sea, including the Spratlys and Paracels, with its seat of government on Woody Island, an island in the Paracels seized from South Vietnam in 1974. Then, on June 23, the China National Offshore Oil Corporation invited bids for oil exploration in blocs well within 200 nautical miles of Vietnam’s coast. The Chinese are evidently establishing the legal and political framework to solidify their claims of sovereignty. And with the announcement of patrols, they appear to be taking their preparations to support those claims to the next logical level: that of defending them.

In Case You Missed It:  Congress and the Administration Should Advance Free Trade to Aid in COVID-19 Economic Recovery

In a ruling last week, the U.S. District Court for the District of Columbia largely sided with the Association of...