It is remarkable, and surely not coincidental, that when you look at the behaviour of Muslim communities around the world 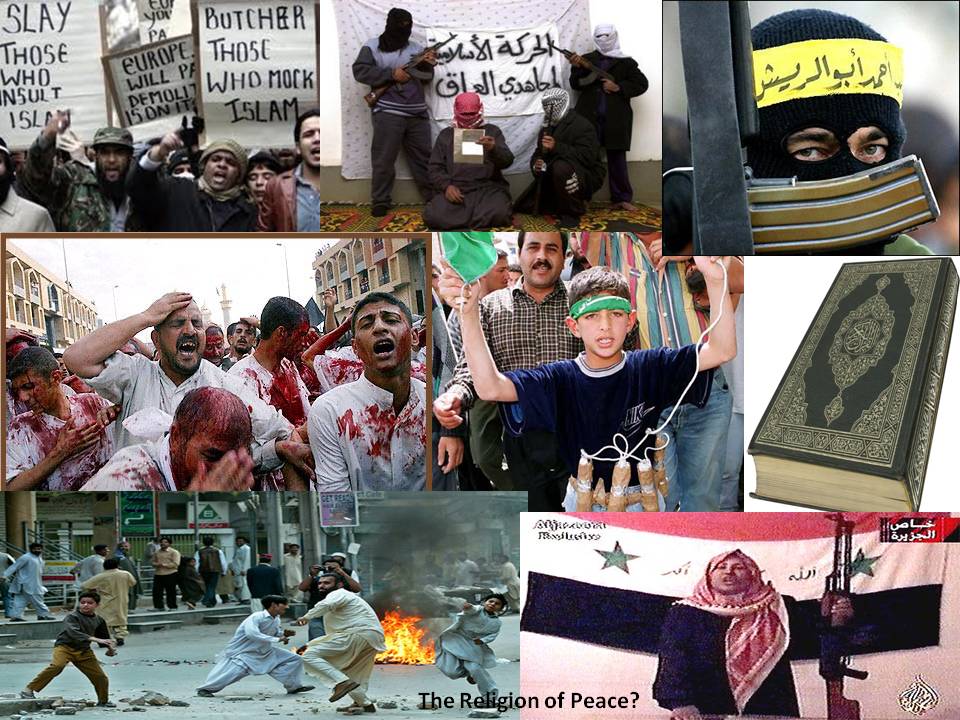 today, and you compare areas which have different Muslim populations, you see startling similarities with the behaviour of Muhammad. There are four key stages in the process of “Islamising” a society, and these all follow Muhammad’s example:

1. When Muhammad first started preaching Islam in Mecca, and when he later emigrated to Medina, when he still had very few followers, he preached relative tolerance and tried to call people to his religion peacefully. Today, in countries like the USA, where the Muslim population is very small, we see that they are relatively benign compared to the Muslim populations of some other countries, as they seek to ingratiate themselves with the local populace. Phony “moderate” Muslim advocacy groups spread the message that Islam is a Religion of Peace, and publicly scoff at the idea that any Muslims are engaged in efforts to transform the legal system of their host country by any means – even as said “moderate” groups push exactly this agenda.

2. When those to whom Muhammad was preaching – particularly the Jews – proved stubbornly resistant, he started to become more hostile towards them, and began to make demands that they accede to Islamic customs, claiming that all those who refused were evil and hated Islam and all Muslims. Today, Muslim communities in countries such as the UK and the rest of Europe are also making similar demands for their host countries to bend over backwards for the sake of Muslims (which the dhimmi leaders often acquiesce to), and they label anyone who does not want their society to become Islamic a “bigot”, an “Islamophobe” and a racist. They use these terms deliberately in order to frighten people away from resisting the spread of the Islamic political system, since they know that many people in the West would rather die horribly than do anything that would make them appear to be intolerant.

3. Once Muhammad had consolidated his power and knew that the other religions in Arabia were not going to submit to his rule willingly, he declared war on them. He waged jihad against his own former tribe, the Quraysh, for many years, eventually defeating them and converting them to Islam. The three main Jewish tribes in the region were all exterminated or enslaved. Every other pagan tribe in Arabia was converted to Islam by force. Today, countries with significantly higher Muslim populations, such as Nigeria, the Philippines and Kenya are witness to frequent violent rioting and mass chaos caused by Muslim mobs and militias. The fighting in these countries has turned physical and the Muslims there are much more open about their rejection of non-Muslim societies and their desire to impose sharia law on them by any means necessary.

4. After Muhammad conquered Mecca, he had successfully won control over all of Arabia, and began to impose a tyrannical rule over the people he governed. Several of those he considered his enemies were hunted down and murdered, and Islamic law was brutally imposed. Today, countries which are virtually 100% Muslim, such as Saudi Arabia, Pakistan and Iran, run what amount to almost fully-fledged sharia states, where persecution of non-Muslim minorities and women is commonplace, and barbaric punishments such as stoning and amputation are carried out.

That these four stages can be observed fairly consistently among Muslim populations all over the world is no coincidence. Anyone who studies Islam can understand the connection between the behaviour of Muhammad and the behaviour of the Muslim world today, and can make accurate predictions about what will be the next step in the process.

It is for this reason that the study of Islam and sharia in the West is so important. One cannot defeat a threat doctrine one does not understand. From accurate knowledge, efficient policy will naturally follow.

Push to Inform the Public on Disastrous Defense Cuts Continues