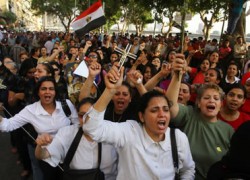 The power struggle between Egypt’s army and the Muslim Brotherhood has been eclipsed by the intensifying civil war in Syria, but this week saw disturbing new developments in Egypt.

Secretary of State Hillary Clinton paid a short visit to Cairo and Alexandria, where she was dogged by several anti-American demonstrations. Protesters pelted Clinton’s motorcade with tomatoes and chanted “Monica! Monica!”—a reference to her husband’s extramarital affair. What was most disturbing, however, was that several protests were mounted by Egyptians who denounced her for supporting the Muslim Brotherhood.

Secular Egyptians opposed to an Islamist takeover should be natural allies of the U.S., not leading a backlash against American policy. The fact that Egyptians sense that the Obama Administration is cultivating the Muslim Brotherhood could demoralize liberal and pro-democracy leaders and instill a sense of abandonment that would make an Islamist takeover more likely.

Another overlooked development in Egypt this week was the kidnapping and release of two American tourists in Egypt’s Sinai Peninsula, which has become a hotbed for criminal networks, Bedouin smugglers, Islamist extremists, and Palestinian terrorist groups. This is the third time this year that Bedouin tribesmen have kidnapped American tourists to enhance their bargaining leverage with the Egyptian government, which the Bedouin long have resented.

The Bedouin tribes of the Sinai are flexing their muscles to protect their smuggling empire, which moves arms, drugs, illegal migrants, and illicit goods across the border to Gaza, Israel, and Jordan. The fiercely independent desert tribes, long neglected by the central government, have become more assertive and reaped greater smuggling profits in recent years, particularly since Cairo has been focused on Egypt’s internal power struggle.

The kidnappings are a symptom of growing lawlessness in the Sinai, which Palestinian terrorists and al-Qaeda-type groups have exploited to launch cross-border attacks against Israel and Israeli tourists in the Sinai. Last August, eight Israelis were killed in a terrorist attack launched by Palestinian militants. The Gaza-based Army of Islam, a terrorist group affiliated with al-Qaeda, was suspected of involvement in the attacks. The Israeli military response accidentally killed five Egyptian soldiers, which further exacerbated tensions between Egypt and Israel.

Clearly, Egypt’s deteriorating internal security environment presents a growing threat to Americans and to Israelis, as well as to Egyptians. Although American tourists in Egypt have been kidnapped and released at least three times in recent months, future hostage-taking incidents are not likely to have happy endings, particularly if Islamist extremist groups rather than Bedouin tribesmen get involved in the action.

In Case You Missed It:  “I Would Drop Him Like a Bag of Dirt” – Rep. Mike Rogers Accused of Drinking After He Lunged at Matt Gaetz After 14th Failed Vote for Speaker
Posted in Terrorism and tagged Clinton, Egypt, Foundry, Freedom, Governments, Islam, Jihad, Muslim Brotherhood, Muslims, Obama, Terrorism, United Socialist States of America.

What Taxmageddon Really Means for Families

Taxmageddon is approaching closer by the day. Much of the focus has been on the impact Taxmageddon will have on...