Senator John McCain has defended the Libyan rebels, calling them his ‘heroes’ who would later fly Al-Qaeda 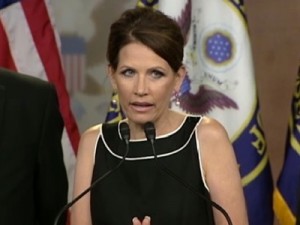 flags after Gadhafi’s fall. He has called for the arming of the Syrian rebels. Both positions are music to the ears of the Muslim Brotherhood and Islamic fundamentalism.

Now John McCain is coming to the defense of Hillary Clinton’s Deputy Chief of Staff, Huma Abedin while ripping Michele Bachmann for raising legitimate questions about Abedin’s familial connections to the Muslim Brotherhood.

On July 9, Rep. Michele Bachmann sent letters to the Departments of Defense, Homeland Security, Justice and State, and to the Office of the Director of National Intelligence, asking that they investigate the Muslim Brotherhood’s influence on and “deep penetration” of the U.S. government. In her letters she named Huma Abedin, Sec. of State Clinton’s Deputy Chief of Staff, as an individual who has familial ties with the Muslim Brotherhood.

In order to dismiss Bachmann’s concerns, we have to ignore three huge problems:

2. Another member of the Muslim Sisterhood’s Guidance Bureau is Egyptian President Mohamed Morsi’s wife, which means Abedin’s mother and the wife of an renowned Muslim Brotherhood member are in regular and frequent contact.

3. Lastly, Abedin’s brother, Hassan Abedin, has allegedly collaborated with Omar Naseef and Sheikh Yusuf al-Qaradawi, two of the most influential terror supporters in the world.

In light of these things, might Bachmann’s concerns have logic, basis, and merit?

Yes, it’s that serious. By ignoring the Brotherhood / Islamic fundamentalist connections of Huma’s family, McCain is taking far too much on faith.

The connections of Huma’s parents should have prevented her from passing a background check for the position she now holds. That’s just a fact and McCain is egregiously wrong. Again the left and a few loony on the right trying to intimidate Bachmann into not talking about this subject anymore.

In Case You Missed It:  “We Do Not Have Different Rules For Democrats or Republicans” – Merrick Garland Pushes Back on Claims Biden Has Been Treated Better Than Trump (VIDEO)
Posted in Terrorism, Tyranny and tagged Clinton, Islam, Muslim Brotherhood, Muslims, Obama, Sen John McCain, Terrorism.