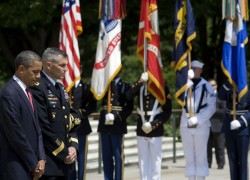 A recent Wall Street Journal article entitled “The Coming Defense Crack-Up” lays out a compelling argument against the defense cuts that are going to hit on January 2, 2013, if something is not done soon.

The sequestration cuts that are mandated by the Budget Control Act (BCA) will gut defense when piled on top of the numerous and deep defense cuts already made.

The entire exercise is going to have a detrimental effect on both the economy and the readiness of America’s military. Key national leaders do not seem to care. Or do they simply have a different agenda?

This is not a conspiracy; it is simply a matter of what a leader sees as more important between a set of issues. Apparently members of the Senate leadership—and perhaps the President—are not fighting to “solve” the problem of the excessive cuts to defense, because they do not see them as excessive at all. They see them as a way to significantly lower defense spending, because they have never been able to do so through the normal legislative process.

The WSJ calls the President “missing in action” and too tied up in the campaign. The BCA is seen as a vehicle to force either higher taxes or major cuts to defense. The President seems to be content with one or the other and would view either as a victory.

As responsible Members of Congress shift into overdrive to find a way out of the death spiral created by the BCA, the Senate refuses to act, and the President has served notice that he will veto any attempt to avoid the “fiscal cliff.” It appears that rather than dithering or not paying attention, the President and Senate leadership have made a clear policy decision and that the political gains of this course are too much to resist.

Bachmann Could be Right About Huma Abedin

Senator John McCain has defended the Libyan rebels, calling them his ‘heroes’ who would later fly Al-Qaeda flags after Gadhafi’s...