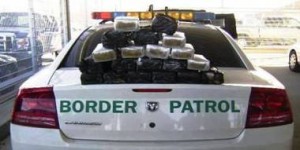 The Temecula I15 Checkpoint has had numerous drug seizure’s including this one pictured.

and one each in Idaho, California, and Montana. These near-interior stations currently act as a second line of defense to our porous border.

It appears that this action is another step away from effective border security and immigration law enforcement. A tiered approach to enforcement allows the border patrol to apprehend illegal aliens even within the interior of the country. Their elimination will provide a free zone for drug smugglers, human traffickers and illegal aliens who make it past the thin line of the border.

This move by the Obama administration has spurred outrage from local officials, members of Congress — even Border Patrol agents.

Though the affected stations are scattered throughout northern and central Texas, and three other states, critics say closing them will undercut anti-immigration efforts in busy areas north of the U.S.-Mexico border, Fox News reports.

The stations are being targeted for closure so U.S. Customs and Border Protection can reassign agents to busier areas closer to the border. One of the affected stations is in Riverside, Calif., just outside Los Angeles.

“These deactivations are consistent with the strategic goal of securing America’s borders, and our objective of increasing and sustaining the certainty of arrest of those trying to enter our country illegally,” Bill Brooks, CBP spokesman, told Fox News in a statement. “By redeploying and reallocating resources at or near the border, CBP will maximize the effectiveness of its enforcement mandate and align our investments with our mission.”

One Border Patrol supervisor in Texas, however, has asked local officers to “voice your concerns” to elected officials, since the closures would remove agents from the Texas Panhandle. Several members of Congress have asked Border Patrol Chief Michael Fisher to reconsider the plan.

Local officials also are fretting over what will happen once the Border Patrol leaves town, since they rely on those federal officials to assist with immigration arrests.

“It could impact us tremendously, since we’ve only got two agents up here now for 26 counties,” Potter County Sheriff Brian Thomas told Fox.

Potter County, in the Texas Panhandle, would be affected by the planned closure of the Amarillo station.

While his area is far from the border, Thomas called it a major corridor for illegal immigrants. His office depends on the Border Patrol for help.

“I can’t hold a carload of people out there on I-40 for eight hours while somebody comes from El Paso,” Thomas told Fox. “I mean, that’s just crazy.”

After angry Egyptians pelted her motorcade with shoes, chanting "Leave!," Secretary of State Clinton insisted the U.S. wasn't there to...