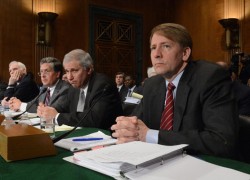 The Consumer Financial Protection Bureau (CFPB) is a veritable wellspring of costly dictates and regulatory excess. Among the dozens of pending regulations it has concocted is a 1,099-page proposal to streamline the mortgage process.

Yes, you read that right: 1,099 pages to “streamline” the home loan experience.

And get this: Creation of the bureau’s 1,099-page blueprint for a more “consumer friendly” mortgage is chronicled in a 533-page report titled “Evolution of the Integrated TILA-RESPA Disclosures.” (TILA stands for Truth in Lending Act. RESPA is Real Estate Settlement Procedures Act. Evidently, the folks at the CFPB didn’t think too highly of the government’s existing mortgage regime.)

The 533-page chronicle of the bureau’s feat positively brims with insights such as “We found the most effective way to reduce confusion surrounding the APR [annual percentage rate] was to clarify that it was not the interest rate by adding the simple statement: ‘This is not your interest rate.’”

The CFPB recently unveiled revised loan forms: one to record mortgage loan estimates and one for closing disclosures. According to the bureau, both have been designed to “reduce cognitive burden,” among other things. Thus, the agency whose raison d’être is supposedly to empower consumers actually embraces the notion that “too much information has the potential to detract from consumers’ decision-making processes.”

Mortgage simplification is one of the 400 or so regulatory requirements called for in the 2,300-page Dodd–Frank Wall Street Reform and Consumer Protection Act.

In just two years, the CFPB has grown from zero to 900 employees. But in redesigning the mortgage documents, it (evidently) required the assistance of Kleimann Communication Group, Inc., a self-described “small, agile, woman-owned” business, at a cost to taxpayers of nearly $900,000. (No wonder the bureau is seeking a 32 percent budget increase for 2013—to $448 million.)

So let’s recap: We have a 2,300-page statute giving rise to a 1,099-page regulation to simplify mortgages, which is spelled out in a 533-page report that chronicles consumer testing from one end of the country to the other. All of which indicates that home loans would likely be a lot simpler if government was a lot less involved.

Defecting Syrian Diplomat Tells All July 17, 2012 16:35 by Pesach Benson Everything you need to know about today’s coverage...