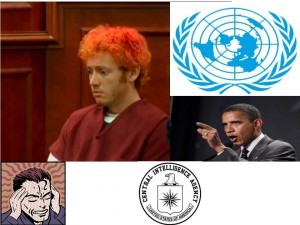 One such theory is emerging in the Aurora “Batman” shootings.

Conservativepapers does not necessarily endorse this, but the fact that it’s gaining popularity so quickly and that it’s not entirely unbelievable means it deserves some intelligent discussion, even if only to ultimately dismiss it.

In summary, the dark thought so many people are having is that the Aurora shootings were staged by our fine government as a way to stir up support for passing the United Nations Small Arms Treaty, which would result in the confiscation of personal firearms in the United States.

What makes this believable is not only the details of this strange case, but the Obama Administration’s involvement in Fast and Furious, a Department of Justice operation that put powerful U.S. weapons into the hands of Central American drug runners.

The ostensible purpose of Fast and Furious was to “track” a previously nonexistent flow of arms from legitimate U.S. gun dealers to the drug syndicates. There is powerful evidence to suggest that the real plan was to have drug runners wreak havoc here at home with our guns, as they have, and use that “discovery” as leverage for further gun controls.

The same theory applies to using Aurora as leverage to pass the U.N. treaty, which is expected to be finalized by the U.N. this week, be signed by King Obama, then be sent to the Senate for ratification.

The timing is exquisite.

Further evidence for the theory includes the demeanor of the suspect, James Holmes. By all accounts an intelligent, unassuming, unemployed student pursuing a Ph.D. in neuroscience, he somehow got on a path where he ordered more than 50 packages containing guns, ammo, explosive materials, body armor and who knows what else.

The materials have been estimated to cost between $10,000 and $20,000, seemingly a hefty sum for someone without a job. The fact he tried to notify a campus psychologist by sending a package over a week before the event, in what appears a cry for help.

Then there’s the issue of the booby-trapped apartment. According to police, it was a highly sophisticated trap, including some methods the bomb squad had not encountered before. The whole thing was set up to kill any first responders who entered the apartment and probably everyone else within a quarter-mile radius, according to police sources.

Some people have questioned where Holmes could have gotten the training to set up such a lethal trap.

The whole crime took months to plan, but after those months of planning and preparing, Holmes, with his hair dyed red and calling himself “the Joker,” shoots up the theater, trying to “kill them all,” then he calmly goes outside to his car and surrenders to police quietly, even warning them about the booby trap.

At the very least, that was a marked shift between the attitude of the man who left his trapped apartment to go on a killing spree and the attitude he had when he surrendered.

Some people think it may not have been the same “person.” Multiple personalities are not just the stuff of fiction. They actually do occur, almost always as the result of severe physical or sexual abuse. What’s worse, they can be deliberately created with CIA mind control, some are saying. Even more Odd is Holmes worked on a mind control project in San Diego and even wrote a thesis on the subject.

There is a psychologist who started her own practice working with people who had escaped from various cults. One of the things that such groups may engage in is a program of torture and abuse designed to “program” a person with multiple personalities that can be triggered by certain key phrases or sounds.

Typically, the victim has no idea he’s been programmed. Then, if the trigger is used, the person switches to the programmed personality and may proceed with a predetermined task or set of behaviors. Once the task is done, the person may switch back and can even be totally unaware of what he’s just done.

Such programming isn’t something that law enforcement or the media want to get into, even if it becomes obvious, but there have been many such cases of people going on rampages because “someone” programmed them. (If you ever look at the video of the shooting of Ronald Reagan, you may notice the shooter John Hinckley continues to “fire” even after the gun has been removed from his hand.)

Holmes’ participation in the neuroscience program has only reinforced such speculation.

The missing piece is a government connection. But that may be hinted at by Holmes’ alleged involvement with Occupy Wall Street as a “black bloc” protester.

Black bloc is not a group but a tactic used by protesters in which a group will all dress in plain black clothing with masks or motorcycle helmets on to disguise their identities. If one member of the black bloc throws a brick, for example, police can’t identify who threw it. Holmes was reportedly wearing such an outfit when he went on his killing spree.

The linking of Holmes to black bloc protests apparently occurred on a page of the Occupy Wall Street website. Many people noticed and have reported the link, but the page itself has been removed from the website.

OWS has been given verbal support by high level members of the Democrat Party, including Obama, who has made OWS’s signature issue of anger at Wall Street a central part of his re-election campaign. Former Obama adviser Van Jones is one of the prime organizers behind OWS, which has also been given the support of the American Nazi Party, Socialist Party USA and the Communist Party USA.

There has long been a fear in some corners of America that one of Obama’s major goals is to eliminate private gun ownership in preparation for martial law, and that a “false flag” event would be staged to initiate it.

This president has railed against people “bitterly clinging” to their guns and Bibles. Many of his executive orders can be construed as paving the way for martial law.

Also, the FAA has authorized the use of unmanned aerial drones over civilian airspace. Just this weekend, the Associated Press ran a wire story that the Marine Corps has announced creation of its first battalions dedicated to law enforcement.

There are plenty of dots, but can they be connected?

Was the Aurora shooting staged in order to help Obama get a U.N. treaty passed that will remove Americans’ right to own firearms? It’s not a question that is likely to appear in the mainstream media.

In Case You Missed It:  FTX was HEAVY into funding vaccine research, biotech engineering and other globalist depopulation agendas through the “scientific research” community
Posted in Freedoms and tagged Colorado, Crime, Freedom, Obama, United Nations.

United Nations wants to turn the world into a modern day Sodom and Gomorrah, legalize worldwide Prostitution, homosexuality and turn...