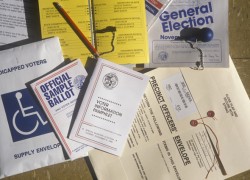 The Heritage Foundation and True the Vote, a nonpartisan grassroots organization in Houston, Texas, are sponsoring an important discussion on Thursday at 2:00 p.m. ET called “Ensuring Election Integrity: The Need for Election Reform.” It will be streamed live online here.

Ensuring election integrity is a fundamental responsibility of government at all levels. States have primary responsibility for administering elections, including federal elections, but federal law supplements state law to prohibit discrimination, prevent noncitizens from voting, require states to clean up their voting rolls, and prevent vote dilution by those not lawfully eligible to vote.

However, the Department of Justice (DOJ), which has become more politicized under Eric Holder than at any time in recent history, has been working hard to prevent states from improving the security of the voter registration and election process in many respects. The Heritage Foundation and True the Vote will have a distinguished panel of experts to discuss current attempts to improve voter integrity and the impediments being encountered by election and other state officials. The panel will include:

This will be a critical discussion about the administration of the upcoming election and the problems faced by those interested in secure and fair elections. We hope everyone can either join us in person tomorrow at Heritage or tune in on our live feed.

Hans A. von Spakovsky is a Senior Legal Fellow at The Heritage Foundation and the co-author (with John Fund) of Who’s Counting? How Fraudsters and Bureaucrats Put Your Vote at Risk (Encounter Books, August 2012).

One of the converts responds that he converted freely and will return home soon to his family by Itamar...