Yet another blunder in Obamacare, the unread healthcare bill passed by the Democratic congress, Hospital leaders are now complaining and told The New York Times they’re not happy with the terms in the health care reform law that will cut in halve the 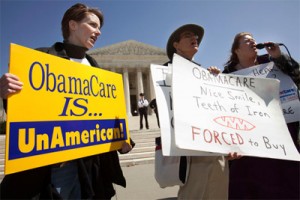 amount of money they receive for caring for uninsured people.  Obamacare refused to address the estimated 11 million illegal immigrants in the country, majority of them without health insurance.

Emergency rooms are required to take in all patients, insured or uninsured, under a federal law signed by President Ronald Reagan. The government allots $20 billion to reimburse hospitals each year for this care.  Obamacare cuts that subsidy in half by 2019, with the reasoning that the Obamacare  will  cut the number of people who don’t have insurance, thus saving hospitals money.

One major problem, the calculation leaves out one key group of uninsured people: illegal immigrants; 11 million plus of them to be exact. A group who will not be required to buy Obamacare insurance and will not be eligible for Medicaid either.

In New York City public hospitals, an estimated 40 percent of all uninsured patients treated are undocumented, and other hospital systems have an even larger share. Experts estimate that about 6 million of the nation’s uninsured are illegal immigrants.

One of Abound Solar’s venture capital investors blamed election-year political games for the collapse of the Colorado-based thin film solar...