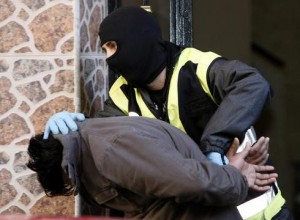 While local authorities have arrested dozens of Islamic militants since 2004, when a key Madrid train station was attacked, the officials claimed that these were the first to be caught with explosives, implicating that they had become an operational cell, ABC News reports.

Diaz, addressing a press conference in Madrid, said that the three Muslims, two from ex-Soviet republics, and one a Turk, had enough explosives and timers to blow up a bus similar to the attack in Bulgaria recently, while at least two of those arrested had practiced flying small “ultralight” airplanes or using small drones.

Diaz said that one of the arrested suspect a “very important member” of Al-Qaeda, who is an expert in explosives and poison.

“This is one of the biggest investigations which has been carried out up until now against the Al Qaeda terrorist group at an international level. There is a clear indication that those arrested could have been planning an attack in Spain or in Europe,” Diaz said.

Diaz described the two suspects from ex-Soviet republics, as Al-Qaeda members and said they were arrested as they traveled on a bus, possibly to cross into France and leave the country, while the suspect from Turkey, who he described as a facilitator, was arrested in a house in the southern Spanish town of La Linea, where the explosives were found. (ANI)