According to the American Psychiatric Association, until 1974 homosexuality was a mental illness. Freud had alluded to homosexuality numerous times in his writings, and had concluded that paranoia and homosexuality were inseparable. 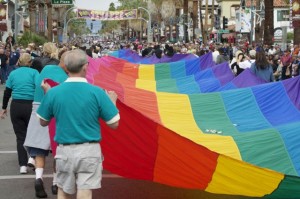 Sodomy Parades are common these days

Then in 1970 gay activists protested against the APA convention in San Francisco. These scenes were repeated in 1971, and as people came out of the “closet” and felt empowered politically and socially, the APA directorate became increasingly uncomfortable with their stance. In 1973 the APA’s nomenclature task force recommended that homosexuality be declared normal. The trustees were not prepared to go that far, but they did vote to remove homosexuality from the list of mental illnesses by a vote of 13 to 0, with 2 abstentions. This decision was confirmed by a vote of the APA membership, and homosexuality was no longer listed in the seventh edition of DSM-II, which was issued in 1974. In other words, not science, but politics, was the chief factor.

What’s noteworthy about this is that the removal of homosexuality from the list of mental illnesses was not triggered by some scientific breakthrough. There was no new fact or set of facts that stimulated this major change. Rather, it was the simple reality that gay people started to kick up a fuss. They gained a voice and began to make themselves heard. And the APA reacted with truly astonishing speed.

Also noteworthy is the fact that the vote of the membership was by no means unanimous. Only about 55% of the members who voted favored the change.

Of course, the APA put the best spin they could on these events. The fact is that they altered their taxonomy because of intense pressure from the gay community, but they claimed that the change was prompted by research findings that were non existent.

So all the people who had this terrible “illness” were “cured” overnight – by a vote! We cam remember reading of the United Nations World Health Organization’s decision to eradicate smallpox. This was in 1967, and by 1977, after a truly staggering amount of work, the disease was a thing of the past. Why didn’t they just take a vote?

An interesting aspect of this is that homosexuality actually does meet the APA’s present criterion for a mental illness! The criterion is: “… a clinically significant behavioral or psychological syndrome or pattern that occurs in an individual and that is associated with present distress…or disability…or with a significantly increased risk of suffering death, pain, disability or an important loss of freedom.” (DSM-IV-TR, p xxxi) Although conditions for gay people have improved considerably since 1974. What’s also ironic in this regard is that if the gay community had stayed within the protective embrace of the APA, they might by now have managed to have homosexuality declared a disability, with benefits payable by the Social Security Administration!

Dr. Ronald Bayer explains how homosexual activists captured the APA for political gain in his book Homosexuality and American Psychology.

Study: Homosexuality is a Reversible Disorder

10 Reasons Why Homosexual “Marriage” is Harmful and Must be Opposed

In Case You Missed It:  WEATHER WARS: China faces a serious water catastrophe that will cause GLOBAL shortages of food, industrial materials and consumer goods
Posted in Freedoms and tagged Liberalism, United Socialist States of America, US Citizen.

If you’ve ever watched a beagle track down a rabbit or a bloodhound track down an convect, you might get...