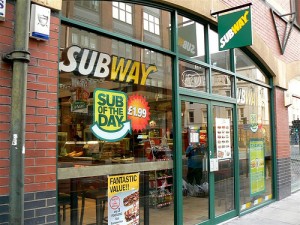 in June upheld the main provisions of the Affordable Care Act, known as Obamacare.

Randall Tabor, who owns two Quiznos sandwich restaurants with 36 workers in Virginia Beach, Va., has rolled back earlier plans he had to triple the number of his outlets since Obamacare was passed in 2010, The Wall Street Journal reports.

Under the law, firms with 50 or more full-time employees must provide health insurance to workers or pay a penalty. Restaurants and retailers, which are among companies that historically are the least likely to provide insurance, have to take into account a number of factors in deciding whether they will grow beyond the insurance-mandated threshold.
Peter Bensen, chief financial officer at McDonald’s Corp., told analysts on a conference call last week the healthcare law would cost each of the 14,000 McDonald’s restaurants, 89 percent of which are franchisee-owned, in the United States between $10,000 and $30,000 a year.

Operators of franchise restaurants such as Subway, Burger King and Dunkin’ Donuts last week met in Washington with legislators to discuss their concerns, The Journal reported. Industry groups are urging the White House to soften the provisions in the regulations that will lay out how employers must comply with the law.

“I don’t have the profit margin to pay for it,” says Tabor, who currently doesn’t offer health insurance to his Quiznos workers.

Some restaurant owners who offer limited health benefits intend to drop them and pay the $2,000 per worker penalty instead of offering the more expensive insurance required under Obamacare.

Moreover, some franchise owners are considering cutting workers’ hours to less than 30 hours a week, the cutoff for part-time workers, since only full-time workers count towards the requirement, The Journal reported.

It’s not clear whether the government will count employees based on each outlet or the combined number at all outlets of a business.

Democrats who wrote the law say it will help businesses get reasonably priced insurance and that it’s essential that employers offer coverage to make the law work. Some employers can use the insurance exchanges that will be created by the law to shop around for insurance, while smaller businesses will receive tax credits to help them cover the costs of providing benefits.

Even so, many business owners say they don’t expect to benefit from the law. Kathie Veasey, owner of a True Value hardware store in Wilmington, Del., who pays the full cost of insurance for 10 of her 11 full-time employees, says she doesn’t expect the law to bring down her premiums.

In a related matter, the Supreme Court’s decision on Obamacare to limit the power of Congress to force states to take certain actions by withholding federal money might have given Texas new ammunition in its battle against federal regulation of greenhouse gases, the Houston Chronicle reports.

Attorneys for the state of Texas argue the Environmental Protection Agency has acted in a similar fashion by threatening to ban construction of power plants and refineries in states that don’t have plans to control emissions of gases that cause global warming.

The EPA’s threat of “a construction moratorium is no less ‘a gun to the head’ than Congress’s threat to terminate Medicaid funding,” Mark DeLaquil, an attorney at the firm Baker Hostetler, which represents Texas, wrote to the U.S. Court of Appeals for the District of Columbia Circuit, the Chronicle reports.

Marriage on the Ballot in Four States This Fall

When citizens in Maryland, Maine, Washington, and Minnesota go to the polls in November, they will be confronted with ballot...