President Barack Obama is having more difficulty keeping 2008 supporters on his side than Mitt Romney is having holding onto John McCain voters, according to a new Gallup pollObam 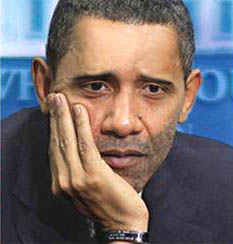 A survey of registered voters conducted July 23-29 found that 92 percent of Americans who voted for McCain in 2008 plan to vote for Romney this fall and just 5 percent have switched sides to support Obama. But among Obama’s 2008 supporters, just 86 percent are planning to do so again and 9 percent are switching their support to Romney.

In Case You Missed It:  EXCLUSIVE: AZ State Sen. Wendy Rogers Asked About Decertification Of The 2020 Election In New Session: “I Will Be Pushing For This As Soon As Possible” (VIDEO)
Posted in Tyranny and tagged Democrats, Election, Obama.

Keeping the Military from Voting in Ohio

Numerous military veterans groups have expressed consternation over a recent lawsuit filed by Obama for America as well as the...