Muslims have started associating anti-Islam activists with the white supremacist maniac, who killed 6 Sikhs in a Milwaukee temple 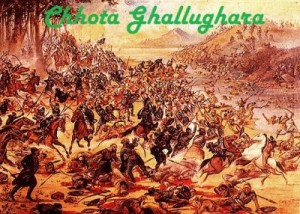 Muslim Holocaust of Sikhs in 1746

attack. Yet the fact is: Islam, White Supremacism and Nazism are similar ideologies.

On Sunday August 5, 2012, a Neo Nazi skinhead attacked and murdered 6 Sikhs in a Sikh Temple, called Gurdwara, at Milwaukee, Wisconsin, USA. There will be an immediate association between this racist maniac with those, who have taken up pens for saving the civilized world from being devoured by Islam. Already Muslim organizations are claiming a common cause with Sikhs in trying to turn this tragedy to their advantage, because Sikhs of this temple had been mistakenly threatened for being Muslims. Also, after the 9/11 attacks in 2001, the first victim of revenge was mistakenly a Sikh.

Muslim Holocaust of Sikhs in 1746
Yet, when Muslims invaded India and murdered 80 million Indian natives, they had a special hatred and fear of the Sikhs (who were great warriors), and murdered them by the tens of thousands, culminating in Sikh holocaust of 1746, known as; The Chh??

The Chh??? Ghall?gh?r? was a massacre of a significant proportion of the Sikh population by Muslims during the waning years of the Mughal Empire. Chhotaa Ghallooghaaraa is Punjabi for the “lesser massacre”. As such, it is distinguished from the Wadda Ghallooghaaraa (“the great massacre”) of 1762. An estimated 7,000 Sikhs died in these attacks.

The Ghallooghaaraa were not pogroms in the sense of the killing of masses of defenseless people. Since the martyrdom of the fifth Sikh Master, Guru Arjun in 1606, Sikhs have known the use of arms and the need of self-defence. They are called Ghallooghaaraa, because of the wholesale slaughter of the innocent, with the intention of genocide. The first Chhotaa Ghallooghaaraa was a dramatic and bloody massacre during the campaign of Afghanistan’s (Durrani Empire) provincial government based in Lahore to wipe out the Sikhs, an offensive that was started by the Mughals and lasted several decades.

This murderous enmity of Muslim against Sikhs has continued to this day with Muslim attacks against Sikhs in Europe, Pakistan, and India.

ISLAM, WHITE SUPREMACY, AND NAZISM ARE ONE AND THE SAME EVIL INHUMAN IDEOLOGY

What is important to understand is that, there is no difference between the ideology of Islam and those of

White Supremacists
Nazis, Neo Nazis, SS, Gestapo
Skin Heads
KKK
WHITE SUPREMACY: “White supremacy is the belief that white people are superior to people of other racial backgrounds. The term is sometimes used specifically to describe a political ideology that advocates the social, political, historical and/or industrial dominance by whites. White supremacy, as with racial supremacism in general, is rooted in ethnocentrism and a desire for hegemony and power, and has frequently resulted in violence against non-whites.”

White supremacy seeks to conquer the world for the White Race, enslave the non-whites, and make non-white women their sex-slaves for spreading the white genes.

Similarly, Islam seeks to conquer the world for the superior Arab race, enslave other peoples under the Arabs, destroy all other cultures, religions and civilizations, and reward Muslim men with unlimited sex-slaves.

Islam is the most powerful racist ideology ever created, far worse then white supremacy and Nazism, given it is founded by Allah, the believed Supreme Creator of the Universe by Muslims. For a detailed description of the Racist Islamic Ideology read article titled: ISLAM IS THE MOST RACIST, BIGOTED, DISCRIMINATORY IDEOLOGY EVER CREATED BY MAN.

Muslims outdo White Supremacists and Nazis by a mile. Whereas the murders committed by White Supremacists and Nazis are horrible crimes of man-made nature, for Muslims, their Allah is Himself a racist God, who commands the enslavement and murder of non-Muslims for establishing supremacy of the Arabs over all mankind. As per Allah’s words in the Quran, Arabs are best of races and have the right to subjugate all other races. And, in that process, they are empowered by Allah to rape, torture, and kill. These actions are sanctified by Allah in the Quran as holy acts, which would guarantee their accession to Paradise (see Quran 9:111).

The Quran was sent only for the Arabs

Thus have WE revealed to you the Qur’an in Arabic, that you may warn the Mother of towns, and all those around it. [Verse 42:7]

Quoting from the first video,

“Allah said that the black-eyed virgins are beautiful white young women, with black pupils and very white retinas, whose skin is so delicate and bright that it causes confusion. Allah said that they are like hidden pearls. They have wide eyes, and they have not been touched by man or jinn. They are like precious gems and pearls in their splendor, their clarity, their purity, and their whiteness.”

The ideologies of White Supremacists, Nazis and Islam are identical in their desire to destroy freedom and equality of all human beings, and complete denial of the declaration in the American Constitution that:

We hold these truths to be self-evident, that all men are created equal, that they are endowed by their Creator with certain unalienable Rights, that among these are Life, Liberty and the pursuit of Happiness.

Jake Neuman is the author of “Islam and Sharia Law Are Treason: Jihad Is Treason” and “Prophet Muhammad (AKA ALLAH): Monster of History.” (free download)

Trump: Romney Must Turn Tables on Democrats Over Tax Returns